We had a customer in the shop the other day who was most insistent that Alan Bennett had died. She was so sure of this fact that we began to doubt ourselves.

Norman Mailer (Executioner's Song and many others)

Kurt Vonnegut Jr (Slaughterhouse 5 and so much more)

Johnny Hart (cartoonist, creator of The Wizard of Id and B.C.)

Peter Haining (author of many historical true crime books, authority on Sherlock Holmes and Doctor Who, afficionado of horror stories and a great many other subjects.)

The world will be a duller place without these writers. I'm sure too that there are probably others who I've missed.

But not Alan Bennett who, as far as I know, is still alive and kicking.
Posted by Pat at 6:39 PM No comments: 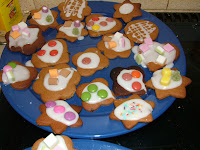 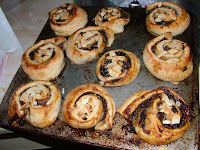 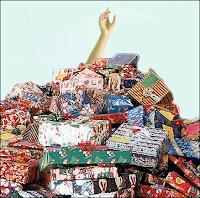 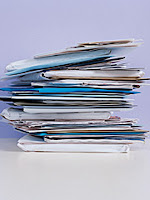 Check, but if you don't get one from me it's because I'm trying to save the planet I'm incompetent and I can't find your address.

(no, there isn't a picture of this in the interests of secrecy)

Check, all finished and blocked and despatched (and it's not Christmas Eve yet, aren't you proud of me?) 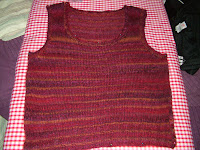 
So that's me ready then. Just the small detail of 5 days retail hell working in the shop to get through. I can so do that. I'm all prepared. I've got festive biscuits to get me through.....
Posted by Pat at 3:53 PM No comments:

I'm hoping to distract you from my dreadful posting record lately with lots of pictures of fibery goodies.

I've been knitting a lot - but most of it is secret squirrel Christmas knitting and so I can't show you, however I have done a little for myself so there is this - 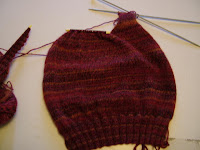 Which is going to be a tank top in Twilleys Freedom Spirit (pattern booket 455, colourway Fire). I'm almost finished the front and have started the back.
I've also been busy surfing on eBay and have bought some lovely stuff. I love it when I get parcels of books and wool!
First I won some lovely books and some fibre from Ambermoggie -

That's the Cornelia Tuttle Hamilton Hand Knitting Collection Book Two for Noro and Folk Shawls by Cheryl Oberle. I haven't photographed the fibre as it's just some natural wool and some black so it doesn't photograph very well. I'm already planning a part hand-spun, part commercial yarn cardigan from the Noro book.

And then there's the latest issue of Interweave Crochet 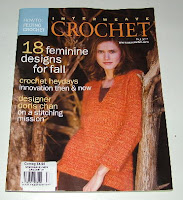 which I bought to see if it was going to be of interest to me. I'm not a great crocheter but people at work all swear by it so I'm having a look. Not sure if I shall go out of my way to buy anymore issues of this but it was interesting none the less.

Then I got some lovely fibre from someone was de-stashing

I especially love the blue/black/turquoise one. It's Merino as is the orange/brown/mustard one. The cream one is merino/silk blend and it feels really soft. I think I might try dyeing it and see how the different fibres take the dye.

I've been reading too. I'm currently on The Tin Roof Blowdown by James Lee Burke. Amazingly, as I am typing this Simon Mayo is just telling me that JLB will be on his show this afternoon so I think Bubba will have to wait for his walk for a little bit longer. I am loving this book. It's set in the aftermath of Hurricanes Katrina and Rita and it's a very angry book. Beautifully written though. I'm not finished it yet but there are only about 50-60 pages left and it's turning into one of those books that I really don't want to end. My most favourite thing about this book however is the endpapers. It's a not very well-kept secret about me that I am an endpaper pervert. I just love a book with beautiful endpapers and this one has them.

The smart people at Orion have used the image from the endpapers as the jacket on the paperback edition. See what I mean.

When I finally finish this one (and I'm making it last as long as I can) then I will be finishing Cranford by Elizabeth Gaskell. I had been under the impression that I'd read all of Mrs Gaskell's work but when I saw the trailers for the TV series I realised I hadn't read this one (or these ones if you're being pedantic). I do like the book, though the TV series is turning out to be rather sweet in a sickly sort of way and is lacking the gently biting wit of the book. It's a bit like Midsomer Murders but without the bodies.

Next up will be an ARC of The Crystal Skull by Manda Scott. I've been looking forward to this for ages. As you know, I love Manda's Boudica novels so I'm hoping this one lives up to their high standards. The publishers seem to be promoting it in a rather Da Vinci Code sort of way which I'm hoping will not prove to be the case.

Got to go now and listen to JLB on the radio. You can listen to it here (it's under Thursday about 2 hours 10 mins in).

Penultimately, I have to apologise for my abject failure to write a novel in November. Somehow the month (and the words) just got away from me. Perhaps I'll try again sometime but at the moment we are in the throes of Festive Madness at work and I'm coming home exhausted most evenings. I can just about manage the simple mindless knitting of the tank top (which is just row after row of stocking stitch), and I have some Christmas knitting still to finish but I'm not planning anything very complicated. Posting may be sporadic for the next few weeks (nothing new there then!) while I resort to wine and chocolate to get me through the rest of the month.

And finally, please remember when you are tired and stressed and at the end of your tether, that if the book you promised your Great Uncle Herbert for Christmas has been out of print for fifty years it's not the fault of the poor harrassed bookseller. Be nice to retail staff this Christmas!!!!!!!