A J Cross - Gone in Seconds 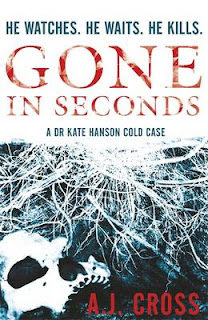 In which I discover that I like my serial killers to be not too close to home!

Gone in Seconds is the first in what will be a series of books featuring Dr Kate Hanson.  It's a debut novel by a forensic psychologist, and it's about...a forensic psychologist.  Well, that's fine. It lends an air of authority to the book. I mean she must know what she's talking about, right.

So this is a thriller set in the West MIdlands and it's about a Cold Case Unit formed of the police and this forensic psychologist who works with them.  I had no idea that was possible - she seems to be part of the police team, not just someone they consult from time to time. Anyway I guess the writer knows, for the reason stated above, plus I am prepared to accept this even if it's not likely for the sake of fiction.

So, the plot is about the discovery of the remains of a young woman who disappeared  five years before from a local shopping centre.  The cold case team have to reopen the old case, for which no-one was ever arrested. This brings a lot of hostility from the previous investigaing officer who is now their superior.  Dr Kate Hanson determines from the evidence that the killer might be  a "repeater" and that there might be other unsolved cases, other undiscovered bodies.

I liked this book.  I liked the character of Kate and her relationships with the rest of the team and with her family. She was believeable and I can see that she will evolve with the series and become a more rounded character.  The plot was well structured and she quite cleverly leads the reader up the garden path with some well-placed red herrings.  She ties the various strands up nicely at the end while leaving the door open for the next book.  I think I learned something about forensic psychologists too, including how they've moved on but TV portrayals have got stuck in the past with profiles and signatures and all those things you hear about in Criminal Minds.  I bet she hates Criminal Minds

I felt the book was a good reflection of the West Midlands where it was set.  In fact that turned out to be the only problem I had with this book.  One of the victims disappeared from a nightclub in Wolverhampton and I thought to myself that my daughter goes to nightclubs there, so really I'd rather not read about a serial killer stalking young girls there. And one possible victim had disappeared from Walsall which is where I live and work.  And that was all a little too close to home for me.  Much as I like fictional serial killers and like to read about them in places that I recognise, and I loved watching Morse when I lived in Oxford so I could spot places I knew, it turns out that I prefer my serial killers not to operate in my neighbourhood. It seems I'm a serial killer NIMBY. Who knew?

Gone in Seconds is available now in hardback and trade paperback.

I was reading a proof copy, kindly supplied by Orion.
Posted by Pat at 8:11 AM No comments:

Caro Ramsay - The Blood of Crows


The Blood of CRows is the fourth in Caro Ramsay's excellent Glasgow-set series.  It's a police procedural following DI Colin Anderson and his team.

At the start of the book, DS Costello is on sick leave after something that happened in a previous book. Anderson is under pressure from his wife to leave the job and emigrate to Australia.  Their normal home, Partickhill Police Station is closed to have some asbestos removed, so the team are based at Partick Central in the meantime. They're divided and in unfamilar territory.

Anderson gets called out to a report of someone in the river, spotted by a passing boat, and when he and DC Lambie get there they find a naked girl chained to a ladder in the water, half-drowned by the rising tide.  She dies in Anderson's arms.  Then a young boy is thrown off a bridge after being tortured. Finally a local gangster is burned to death in an arson attack.  Could all these cases be linked, could they be connected to the Russian mafia, or are they linked to Glasgow's own gang-filled history?

I'm a big fan of Anderson and Costello. They are compelling characters who have grown and changed thoughout the series, and they continue to evolve.  The books are filled with interesting, multi-dimensional characters.  The plotting is intelligent and complex.  You need to pay attention, there's so much going on here.   Ramsay is not afraid to ask deep questions of her reader, about morality and the nature of vengeance and where those lines are that must not be crossed. She puts her characters in difficult situations and gives them big decisions to make.  She really knows how to build the tension too.  There is nothing predicable here, she really keeps you on your toes and makes you want to keep reading to the very end.

Ramsay is not as well-known as Ian Rankin or Stuart MacBride but she deserves to be. These books are easily as good as theirs. The Blood of Crows is that rare thing, an intelligent crime novel that you just can't put down, one that keeps you thinking even after you finish it.  I can't wait for the next.

The Blood of Crows is published by Penguin in the UK and is available now.
The other books in the series have just been republished with new jackets. They are Absolution, Singing to the Dead and Dark Water.

I bought my copy of The Blood of Crows with my own hard-earned cash.

I've been away from the blog for a while, as I'm sure you've noticed. I've been busy with work and life and haven't had a lot of spare time. Blogging, for me anyway, involves a lot of thinking time, not just the time spent at the keyboard, and there hasn't been a whole lot of space in my life for that recently.

Anyway, some of my work/writing commitments have unexpected evaporated for a while so I thought I'd use the opportunity to get back to the blog.

I'm planning a new focus, with more about books - longer reviews of current and backlist titles, plus an occasional look at some of the vintage craft books I have in my library.

I hope you enjoy this new format and continue to read the blog.
Posted by Pat at 4:29 PM No comments: