Less than a week before our holiday and we're on Hurricane Watch.

Hurricane Gustav is barrelling across the Gulf of Mexico as we speak, heading straight for New Orleans. 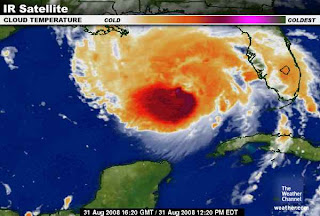 I hope it doesn't hit the city, or it weakens significantly before it gets there. Not that we will be anywhere near New Orleans on Monday when it's expected to hit, but I think the people of Louisiana and the other Gulf states have had enough to deal with.

Hurricane Hanna is east of the Bahamas, heading for Florida. This one is the one we are currently a little concerned about - it doesn't look like it will impact the Gulf Coast region where we're headed, but will probably skip up the east coast of the States - giving us a bumpy ride as we fly in, and if we're very unlucky, could strand us in Atlanta where we change planes.

Just to keep us on our toes, there' s a tropical depression forming out in the Azores which looks a bit dodgy and which, if it becomes a tropical storm / hurricane, will be called Ike.

That'll teach us to go to Florida in the Hurricane Season.
Posted by Pat at 2:29 PM No comments:

The Doctor Who Memorial Chicken Coop 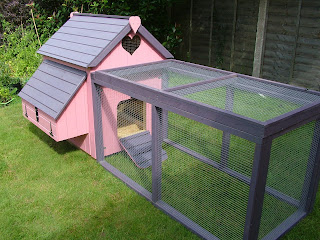 so named as it was paid for with the sale of some Dr Who memorabilia on eBay.
Just about big enough for 6 chooks, but we'll only have 4 (to start with). They'll get out of the run when we're around and have free range of the garden. We won't actually get the chickens until we get home from Florida though. We can't wait.
Posted by Pat at 3:34 PM No comments:

Here's the thing...it may be two weeks until we go on holiday but the realisation has just hit me that I actually only have 2 more days off before we go (not counting Sundays which seem to disappear in a flurry of family stuff).

Now, I am an uber-organised sort of person when it comes to holidays (this is through necessity, not a natural leaning) and I like to have everything ready well in advance. I'm the sort of person who has a list of the lists I've made. So today has been a major rush to get some stuff completed that's been lurking around the workbasket for a while.

I finally sewed the hem on the blue fishy skirt, so that's finished now. I sewed the seams and the waistband of another skirt in some gorgeous Amy Butler fabric called Coriander. This had been cut out but was waiting for me to get the sewing machine out and start sewing. Just got to thread the elastic into the casing, make a cord for the waistband and stitch the hem.

For most of the week I have been frantically knitting this top in Sirdar Luxury Soft Cotton. I've only had the yarn for few days after giving up waiting for Angel Yarns to deliver it, cancelling my order and buying it from Get Knitted instead. I can't imagine what I was thinking when I didn't use them in the first place - it was delivered within 2 days with none of the excuses and delays that were forthcoming from Angel Yarns. The Amy Butler fabric came from Get Knitted too. It's quite a slow knit as it's 4ply - just yards and yards of plain stocking stitch and the yarn is very splitty so you have to watch what you're doing. I'm almost finished the back so I should be finished the front in good time and then there's just a little edging to the neck. I'm not panicking about this yet. Yet.

We finally bought our chicken coop and will be collecting it on Sunday, so we can get it all set up and sorted ready for the chickens which we'll get when we come back from Florida.

I have been reading as well. I finished The Road by Cormac McCarthy. It is a wonderful book, beautifully written and very thought provoking. I'm not at all surprised that it won a Pulitzer. I progressed to a proof of the new Ian Rankin, called Doors Open, which is published on September 16th. It's set in Edinburgh (of course) and is about an art heist perpetrated by some amateurs. It was an enjoyable read with an interesting plot and good characters but it felt a bit lightweight. I think I was expecting something a bit meatier, something with a bit more profundity for Rankin's first Post-Rebus novel. Worth a read, but don't expect a great deal of depth.

Now I'm on Volk's Shadow by Brent Ghelfi, another proof. This is the second in the Volk series, and I did enjoy the first one. This one is, so far, proving to be just as good. It's really so not the type of book I would normally pick up - a tad on the violent side and rather too many guns, but like Lee Child, this series is turning into a guilty pleasure. Think Jack Reacher without the scruples and you've pretty much got Alexei Volkovoy. This one's not published here until November, though it's out in HB in the US now.

Lastly I am having a dilemma (as usual) about my holiday reading. How many books to take? Which books to take? What if I run out of books? What if every bookstore in Florida suddenly spontaneously combusts and I have nothing to read? More on this next time!
Posted by Pat at 4:57 PM No comments:

I had a great day out yesterday with my spinning group.


We headed for Liverpool to the National Exhibition of the Guild of Weavers, Spinners and Dyers. The quality of the exhibits was just amazing. Some of the craft work was just incredible. Unfortunately I have no photos to show you, so you'll have to take my word for it. However I recommend that if you are at all local then you go and have a look. My one irritation with the exhibition was that while there was a handout telling you who's work each piece was and what Guild they belonged to, there was nothing with the work to indicate how it was made, or what materials were used. If you wanted to know that - and of course we did - then you had to go and look it up in a folder by the reception. Wouldn't it have been more helpful and informative to put a little card by each piece with that information, or to have that info in the handout?


Also, a little note here to the people of Liverpool, or at least the people organising the Capital of Culture thingy - how about a few signs to the venues? Trying to find the Cornerstone Gallery at Hope University was a tad challenging to say the least. I have to ask exactly how people can find a gallery if the only sign is above the door, which is concealed round a corner, behind a closed gate?


Anyway the exhibition is full of wonderful and inspiring work - weaving, handspun, knitting, embroidery, quilting - you name it, it was there. I feel very inspired and wish I had half of the talent these people have.


From there we moved on and spent an hour or so mooching around the Albert Dock. I was rather disappointed in this. When I was last there (must be more than 20 years ago!), it was full of lots of arty crafty little shops selling lovely jewellery etc. Now it seems to be just a tourist trap. But we wandered through the Museum of Slavery which was interesting, and had a cup of coffee and watched the people.


Then we moved on to what for me was the highlight of the day. We went to Crosby to Anthony Gormley's amazing art installation, Another Place. That's the one with the 100 iron men standing on the beach looking out to sea. It is totally wonderful. I really, really wished I had taken my camera. I took a couple of shots with my cellphone but I have no idea how to download them onto the computer so I have pinched a photo from Sefton Council's website. I'm sure they won't mind.

I really want to go back when there's no-one else around. I love big deserted beaches anyway, and this is a great beach, but I'd love to see the figures all disappearing off into the distance, all staring seaward, without the many, many people, children and dogs that were there on a sunny, but terribly windy Sunday afternoon.

It's well worth the trip.

Last Saturday the lovely ladies from my spinning group got together for a dyeing day.

It started off with the intention that we would do natural dyeing, and to begin with we did do a little of that. 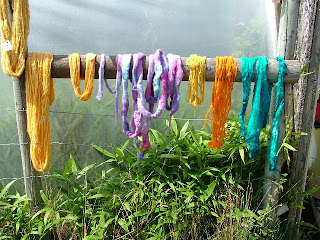 Th orangey ones are all done with a solution of dahlia flowers.

But soon the lure of all the pretty colours from the synthetic dyes proved too much and we went wild. 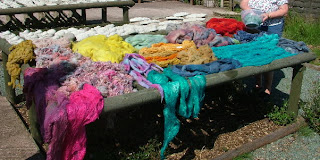 It was great fun experimenting with all the different colours and some different fibres - that bright pink is some beautiful silk. We couldn't have picked a better day as the sun shone and it was really hot - if anything it was a bit too hot to be standing over a pan of steaming wool!

I don't believe I updated you on Bubba's progress after his visit to the vet. He's doing well, the vet is pleased with him. There's some loss to the muscle tone on that leg but that's only to be expected and we've stepped up the intensity of the hydrotherapy to build that back up for him. Fingers crossed there should be no need for him to go back to the vet.

This week I've been reading The Star of the Sea by Joseph O'Connor. It's a historical novel set during the potato famine in Ireland and is about the journey of a boat across the Atlantic with a cargo of people heading for a new life. The intertwining stories of the various people are fascinating and it's well-written. I actually picked it up beacuse I have a copy of Redemption Falls, O'Connor's latest book and I thought I'd better read the other one first. I'm not sure there's such a great degree of link that you would need to read both, but I'm sad and obsessive about these things! I like to read books in the right order. Redemption Falls is set at the end of the American Civil War and I shall probably save it to take on holiday with me.

It's been a little

light relief (if death and disease can be light relief) from The Road by Cormac McCarthy which although beautifully written is not an easy read. I'm enjoying it immensely but every now and then I need to get away from the unremitting despair of it and read something more cheerful (you know, something with serial killers and psychopaths).

Most importantly I've got hold of a proof of the new Ian Rankin novel (due in September). Called Doors Open, this is his first book since he pensioned off Rebus and I'm keen to see what he'll do. The premise sounds good - an art heist from the National Gallery of Scotland. I'll let you know what I make of it when I'm finished.