I had an email this week from Seb over at ArtsWOM telling me that Mills and Boon were to start publishing crime fiction and asking what my opinion on the matter was.


I have to admit that this news had bypassed me, but when I looked to see what they were planning I wasn't unduly worried about the future of the detective novel. It seems that they're intending to publish five titles every two months, covering everything from cosies to thrillers, under the imprint of Black Star Crime. I can't really see a downside to this at all. I don't think the vast majority of crime fiction readers would stop buying other books in order to buy these. On the other hand some readers of M&B romances might pick up a Black Star Crime novel, like it and read other crime novels. M&B have been around for a long time and if they didn't think there was a gap in the market for this type of branded series, they wouldn't be doing it.


Plus, this opens up a whole new market for aspiring crime writers. M&B say they will be using some established writers and some new ones. As a company they have always been very proactive in recruiting new talent, issuing detailed guidelines and encouraging submissions. I know Seb is worried about the standard of the writing, but I think you need to trust the reader. If the writing's not good then they just won't sell. A crime novel is a totally different kettle of lobsters to the romance novel. It needs to work on a technical level and that takes a certain amount of skill. Of course both you and I know that even bad crime novels get published, but do writers of bad novels stay successful?


I think there's room in the market for all genres of crime writing and all tastes. Whether or not this series will work in the long run remains to be seen but I'm not overly concerned about the impact this will have. You never know, they might unearth a great new author for us!


Talking of new authors, I had a proof of Volk's Game, the first novel by Brent Ghelfi, due to be published in April. It's a modern day thriller, set in the shady underworld of Moscow with its mafia bosses and military kingpins. Alexei Volkovoy is not a nice man. He runs an empire of drugs, prostitution and pornography and yet somehow Brent Ghelfi made me like him. He's a bit like Lee Child's Jack Reacher but without the scuples, which makes him a very interesting character. This is really not a book I would normally have picked for myself, graphic violence, guns and ex-military protagonists not being at the top of my favourites list, but it was really good. So thanks to the lovely Gemma at Faber & Faber for sending me this as I would never have discovered it otherwise. A full review will be winging its way over to Eurocrime this week sometime.


I was less successful with another proof that Gemma sent me - The Man in the Window by K O Dahl. I just can't get to grips with this Scandinavian crime thing. I've tried, I've really, really tried but I just can't read them. I don't know if it's the translation or if it's that I don't get the Scandinavian mindset but I just find them tedious. Where's the tension? Where's the drama? I've had to give up on the Man in the Window and I've passed the proof on to someone who will hopefully enjoy it and do it justice.


After my disasterous foray over to Norway I am now back on familiar territory with Sara Paretsky's Blacklist. I've probably said before but Sara Paretsky was the first modern crime novel I ever read, thereby condemning me to a life of crime. I hadn't read any of her more recent novels but I was prompted to pick this up off the shelf as she will be coming to the Black Country at the end of March. West Bromich Town Hall will be holding An Evening with Sara Paretsky on 27th March 2008 at 7.30pm. More info can be had from West Brom Central Library (or email me). This is a bit of a coup for the Black Country as I understand she doesn't do many publicity events. I'm looking forward to this and will of course report back on it.


I have of course been knitting. The Williamsro cardigan is progessing well, though more slowly than predicted, possibly because I haven't actually been working on it. I am only on the first sleeve. Here however is the almost finished body with the front and bottom edging done. 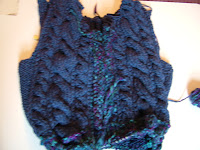 And here's a close-up of the edging. 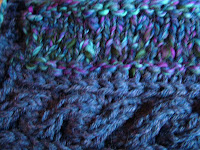 I am hoping to finish at least one sleeve and possibly both this afternoon as the Reading v Aston Villa match is on the TV - excellent stuff to knit along to.

Ok, so it seems I'm not too good at the whole regular blogging thing. I'm just not sure where the days go to. They just slide by in the endless rota of work, reading, dog-walking, knitting and a bit of housework (but not too much housework!)

So, what have I been reading since the last post? Well, I finished A Vengeful Longing by R N Morris, a review of which will be on its way to Eurocrime this week, hopefully.

And I started (and finished) the first book in the Medicus series by R S Downie - Ruso and the Disappearing Dancing Girls. I liked this even more than the second one (which I read first). This is not to say that the first one was better than the second, but I think I should have read them in the right order. I do try not to read books out of sequence, but I had a proof of the second book for review. I liked it a lot so I wanted to go back and read where it all started.

Now I'm reading the second of the books that Fabers sent me for review a couple of weeks ago. This one is also set in St Petersburg, but this one is a modern day thriller. I'm thinking that Porfiry Petrovich would be a tad horrified at the levels and kinds of crime occurring in his city in the present day. It's a far cry from the gentle (though still murder-filled) world of 19th century St Petersburg.

I've also been reading Tommy by Richard Holmes, which is an account of the First World War with a particular emphasis on the ordinary soldier. It's fascinating and is throwing up all kinds of questions and sidetracks for me to explore. Don't you just love research!

The Williamsro cardigan is growing quickly. So quickly in fact that I had to spend the afternoon yesterday spinning and plying the merino for the edging as I think I will probably be finished the main body of the cardigan by the weekend. I'm not sure if I have quite enough of the merino though, so it may have to be mixed with something else as I knit it - the odd random stripe of purple or turquoise should solve the problem. I should know when I've spun the last third of the roving and measured it whether or not that will be necessary. The cardigan is certainly a quick knit, as you would expect from aran-weight wool used double and knitted on 9mm needles.

Apologies for the lack of links in this post, but our broadband connection is acting up again so it was either wait another day until in was working and I could get access to a website where I could link to, or just to post without the links. It's quite possible that I won't be able to publish this either - keep your fingers crossed.
Posted by Pat at 9:30 AM No comments: