Actually I have to admit that there hasn't been a whole lot of reading done here, due to work and some deadline knitting I was desperately trying to finish.

Furthermore, I have had a few books recently that have just failed to thrive.

I had a copy of The Cleansing Flames by RN Morris which I was supposed to be reviewing for Eurocrime but to be honest I just could not get on with it. Now, I loved his three previous books in this series which features Porfiry Petrovich from Crime and Punishment as the detective (Prosecuting Magistrate if you want to be technical). But this one just didn't grab me at all. It starts with a body being found in a river in St Petersburg just as the Spring Thaw starts, co-inciding with a string of arson attacks across the city as revolutionary fervor begins to build. So far so good, but after a promising start it rather loses the plot (quite literally in this case) as the next 50-60 pages I found to be very tedious, with a lot of political discussion and some waffling by Profiry Petrovich, and not a lot of action. I really tried, because I do feel that I should finish review books but I just could not make myself finish this. I got to page 179 before I gave up. (Sorry, Karen!) I think this is a shame as the previous books were good and I've read all of them.

I even tried to tell myself that I couldn't read anything else until I'd finished the RN Morris, but I could only hold out for so long on that because I had in my possession the latest Mary Russell book from Laurie R King. Now you know that I absolutely love this series, and this one is no disappointment, thankfully. The God of the Hive follows on directly from where The Language of Bees leaves off, so it would be difficult to tell you much about it without major spoilers for that book, so I'll just say that it's great, that Mary Russell is wonderful, the plot is complex, there are big shocks along the way, and that I cannot wait for the next installment.

Luckily Ms King has provided us with a little something to keep us all going until The Pirate King comes out in September. Beekeeping for Beginners is a short novella in e-book format which recounts that first meeting on the Sussex Downs between the retired Sherlock Holmes and the fifteen year old Mary Russell which is told in The Beekeeper's Apprentice. But this novella tells us the story from Holmes' point of view. Go read it, it only costs £1.50 and it's well worth it.

Pretty much anything that I read after that was going to pale by comparison so perhaps I was a tad unfair on Aline Templeton's Lying Dead, which also did not grab me. It's not a bad book, I just wasn't that interested in most of the characters. I've read one of these before and I liked the main detective Marjory Fleming, but this book was spending far too much time with a cast of shallow undeserving characters with whom I did not wish to spend my limited reading time. Perhaps it just wasn't the right time for this particular book.

Anyway I'm now reading The Hare with the Amber Eyes and absolutely loving it. To the extent that I was almost late for work this morning. I was sitting in Starbucks having a Flat White and reading and was so engrossed in my book that I didn't notice the time. Ooops.

Back soon with reports on Knit Nations and Fibre East, plus the strange rumour that I read a fantasy novel and enjoyed it.
Posted by Pat at 7:07 AM 1 comment:

I've been really, really busy over the last few weeks dyeing yarn and fibre and photographing it, and now I am ready to announce to the world that my new venture is up and running. 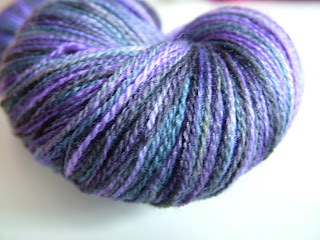 I've opened an Etsy shop so now you can buy yarn and fibre that I have hand-dyed. Please go take a look. I hope there will be something there that you like. It's not super-stocked with yarns yet, as I'm starting slowly and keeping it manageable. All the yarns and fibres are named after crime novels, so now you can knit your favourite book or your favourite author, or even just pick a colour you like and you might discover a book you'll love. 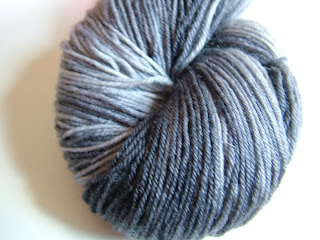 I came back from Knit Nation at the weekend full of inspiration for new yarns, and I shall be going to Fibre East this weekend for more research (well, that's my excuse anyway). Say hello if you see me there and get a free MysteriousYarns keyring. I'll have my Ravelry badge on and I'd love to meet you all.

To celebrate the new shop and because it's Fibre East this weekend I'm offering free UK shipping in the shop. Just use the code EAST1 at checkout and please tell all your knitting friends about the new shop.