So, now we come to the pile on top of the bookcase in the bedroom. This is not a good place to keep books as it's right under the window and they have a tendency to get faded/yellowed by the sun. However needs must so here they sit. 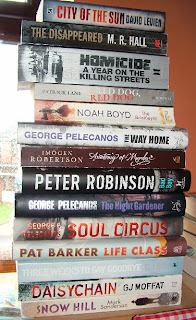 These show off the full extent of my failure to read books that aren't crime - there's are only two that are not crime novels and they are Life Class by Pat Barker, because I like Pat Barker and I've not read any of her more recent work, and Red Dog, Red Dog by Patrick Lane, bought because dovegreyreader recommended it (and it's got a dog in the title!).

There's a true crime book - Homicide by David Simon . The Wire is one of those TV series that I keep intending to watch and have never quite got round to. We have the DVDs of the first 2 seasons - they're in the TBW pile. :)

Currently our spare TV watching time is being taken up by watching The Onedin Line - obscure TV channel Yesterday (found somewhere far, far down the Sky planner) is showing all of it (seems there were 92 episodes) right from the beginning. I have a vague recollection of it from the 1970s but don't remember any of the storylines in detail but we are enjoying it. Even Pete who has been known to scoff at my predilection for drama with "bonnets". It seems that bonnets are OK if there are also ships involved. Part of the fun is playing Onedin Line bingo where you get to spot the same ship masquerading as another by a change of sail colour and a handily placed lifebelt with the name on; and the same shots of "Liverpool" docks used over and over again. You get 50 points for the shot where the sailor winds the rope round the cleat (?) which is used in almost every episode.

Anyway back to the books. I had a lucky day in a charity shop in Banbury a few months back and picked up a selection of crime proofs - Daisychain by GJ Moffat, Snow Hill by Mark Sanderson Thee Weeks to Say Goodbye by CJ Box and The Anatomy of Murder by Imogen Robertson. I'm not sure most of these had been published when I bought them and I intended to read them and review then before they came out but they missed their moment and so now they hang around like so much wet washing, slapping me in the face when I pass and taunting me with their neglect.

There's a lot of George Pelecanos in this pile. The Way Home and The Night Gardener are his more recent work and I shall get to them soonish, but Soul Circus is a replacement for a battered paperback. I like hardbacks if they are books I want to keep, though I do prefer a paperback for actual reading. Does that make sense? I can carry a paperback around easily. I'm not usually bothered if it gets creased in my bag or has a yoghurt incident with my lunch. They're easier to read in bed too. A hardback when I drop it as I fall asleep has a tendency to fall to the floor with a loud thump, waking me up and possibly killing the cat. If we had a cat. Which we don't.

Other books in this pile - City of the Sun by David Levien, sent to me to read for a promotional thing at work and it was the last of the books I had to read. I ran out of time but I'd still like to read it sometime. The Bricklayer by Noah Boyd - American, likened to Lee Child, ex-forces guy meets FBI superwoman. Oh and I think there's a serial killer. I'm probably going to hate it, but I like to try all sorts at least once. The Disappeared by MR Hall - I'm still on the fence about the previous one (The Coroner) so this one might be here a while. Lastly Bad Boy by Peter Robinson, bought when he came into the shop a couple of weeks ago to sign copies for us. He's a very nice man. I've tried a couple of the Alan Banks books and not been bowled over by them but I'll give this one a try.

Next post - should have been about the pile on top of the bookcase downstairs - only reachable by standing on the sofa - but we have exciting news - a new bookcase has arrived, been assembled (bless Ikea and their wonderful Billy bookcase) and squeezed into the narrow space between the aforementioned bookcase and the fireplace. I have a new bookcase. It's already full.