So, I picked up a little selection on Sunday at a car boot sale - all authors I'd never read before - and settled down for a good fix of serial mayhem.

The first book off the pile, though it looked like a crime novel from the cover, turned out to be a romantic novel in disguise. The Murder Ballad by Jane Hill (she's British!) was a sheep in wolf's clothing. It was about a woman who meets an American folk singer, marries him with undue haste and moves to the backwoods of North Carolina with him. Unsurprisingly he turns out to have a few skeletons in his closet. It wasn't a bad book, and once I was resigned to the fact that there was ne'er a serial killer in sight, I kept going and enjoyed it in a half-hearted sort of way. Having just watched and loved the BBC's Folk Americana series I was interested in the old ballads that were mentioned throughout the plot, but you never got all the words or all the story. If you wanted to read a better book about traditional music (though these are set in Tennessee, not Carolina) then you should take a look at Sharyn McCrumb's Ballad series, and in particular, The Songcatcher (which seems sadly to be out of print in the UK). It charts the passing down of a song though the generations of a family. Much better fare. 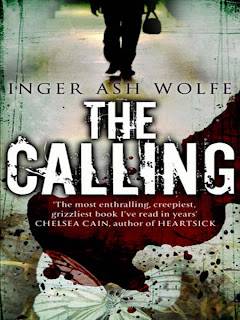 Still on my quest for sequential murder I picked up The Calling by Inger Ash Wolfe. This is actually set in Canada, not the US of A, but at least it has a killer, and he's onto his fourth (and I'm not even half way yet) so that definitely makes it a series. I'm liking the main character who is, unlike most detectives in this genre, a lady in her sixties living with her ageing mother. So far so good. This is different enough to pass muster, but it has those familiar markers common to the genre - mysterious killer (probably a sociopath), experienced police chief, rookie cop. Suits me.
Posted by Pat at 5:16 PM 1 comment:

The postman has been busy this week bringing a selection of lovely books to Austin Towers. 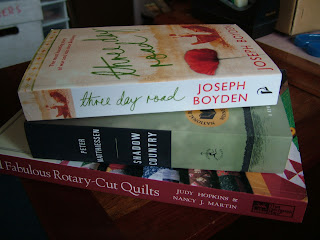 First there is Three Day Road by Joseph Boyden (as recommended by dovegreyreader). I'm still researching the First World War (for the book I am currently not writing) so a tale about a Native American man's experiences of Ypres and the Somme is right up my street.

Next on the pile is Shadow Country by Peter Matthiessen. This a re-working of his Watson Legend trilogy which had been out of print for a while. It was billed in the Times as not just a Great American Novel but a Great Florida Novel. How could I resist. It's not published in the UK and was a bit tricky to get hold of. I had to resort to eBay in the end.

Finally there's a great quilting book called 101 Fabulous Rotary-Cut Quilts which is an absolute mine of great block patterns and quilt patterns and inspiration.

Before I get to these though I'm still working through The Given Day, slowly, savouring it, making it last. It's not too often I grant a book that luxury. Review books need to be read quickly, notes taken and thoughts recorded and there are always too many more waiting on the TBR pile for most books to be treasured like that, but every now and again I find one that warrants this treatment.

Because The Given Day is a mighty tome and too heavy to carry around for day to day reading I've got through a few others. I started with The Boy in the Striped Pyjamas. I know, everyone else in the world has already read it, and I'm way behind you all. It was still worth it. An excellent little volume. I've already passed it on to someone else to read, who happened to mention that they would like to, the day I'd finished it. Luckily I still had it in my bag and could oblige.

For a bit of a change I slotted in A Short History of Tractors in Ukrainian which had languished on the TBR pile for a long time. It was interesting and amusing but I'm not sure I shall rush to read Two Caravans (which is also in the TBR pile).

I'm now halfway through Bleeding Heart Square, just out in paperback. It's very good, as you would expect from Andrew Taylor. More when I'm finished it.

All my knitting this week seems to have had a circular theme. Firstly I am almost finished the circular yoke cardigan - just the button bands to go. As the main body of the cardy is black this will have to wait for a day with more light - I just looked out the window and it's snowing again! That wasn't forecast. 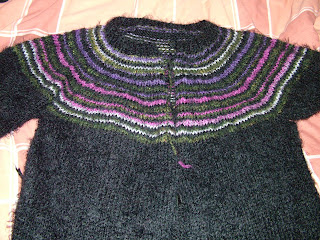 It's mostly knitted in Stylecraft Charleston with the yoke in random stripes of Wendy Fusion in Berry and some handspun in various shades of green. It's very heavy and rather on the large side making it the perfect sweater for snuggling into on cold days. I'm planning to put odd vintage buttons on the front. 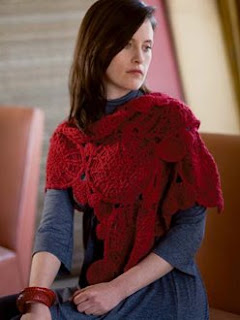 (picture from the Berroco website). Here is one of the large circles blocking. 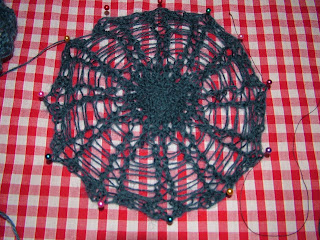 There will be 14 of these large circles (so far I've only done 4), and about 35 others in small and medium which are all stitched together to make the scarf. I'm knitting it in some old Jaeger Alpaca in a lovely petrol blue. It may take some time as knitting the circles is a bit fiddly - the large circle needs three different sizes of needle!

Next up will be a Mobius shawl from Cat Bordhi's Treasury of Magical Knitting. This book was a Christmas present from Pete and this will be the first thing I'm going to knit from it. I'm planning to use that purple handspun from the fibre I got from Gnat and Sheryl in Florida, mixed in with some odd strands of other stuff to give it a bit of extra texture and pizzazz.

Today while knitting I've been listening to C J Sansom's Shardlake series. I'm on Dissolution at the moment and enjoying it very much. I have read the book before but I'm still enjoying the audio (though it is abridged).
Posted by Pat at 4:48 PM 1 comment:

This is Getting Old..

I'm getting twitchy from sitting on my butt for three days. Ordinarily I'd be happy for the chance to sit around doing not much for three days but when it's forced on me and I really can't go anywhere, or do anything very much, it's really not much fun.

So, to alleviate the boredom here are some pics the Evilpixie took of Bubba and the chooks in the snow the other day. 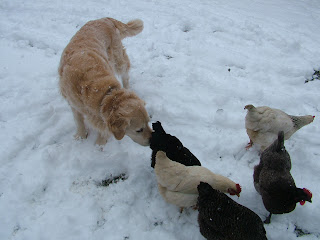 Bubba has got over his fear of the hens and now seems to think they are small dogs - he will insist on sniffing their arses. 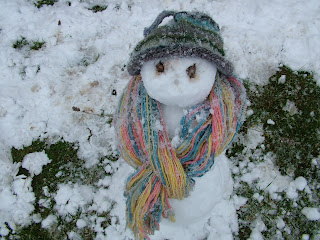 Here's the snowman she built, very fetching in a handknitted Noro hat. Note that it has no nose. It had a mushroom (we had no carrots) but Bubba ate it. 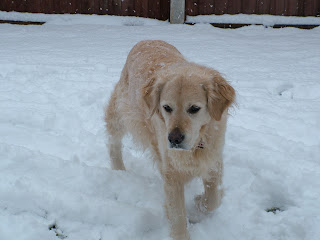 Here's Bubba looking very handsome. He's been limping a bit this week. We hope this is just a touch of arthritis brought on by the cold and not anything more sinister.

Marooned on my sofa I have started the new Dennis Lehane, The Given Day. So far so good. The opening chapter, about Babe Ruth and a scratch baseball game with some negroes by a railroad track is fantastic and would stand up as a short story in its own right. I can't wait to see what Lehane does with it as the book progresses.

Yesterday, as the weather was bad I decided I would take the bus to work. This turned out to be a big mistake as I slipped on a patch of ice on the way to the bus stop and twisted my ankle.

Today (and most of yesterday) I have been on the sofa with my foot raised. It hurts to walk and I can't drive. So I'm marooned in the house again. I don't have to go to work again until Tuesday though so I'm just resting the ankle and doing a bit of knitting and a bit of reading and a bit of netsurfing on the laptop. Photos of the kntting etc tomorrow as it's dark now and the camera is upstairs. Going upstairs is too painful just for the camera!

I've had enough of the crap weather now, so can it please go away.
Posted by Pat at 6:33 PM No comments:

Brought To You By the Letter A

I have been randomly allocated the letter A by Roo over at Roo Knits so here are a few things I like beginning with that lovely letter.

Apples - most versatile of fruits, loved by me in pies, cakes, on it own and turned into cider. 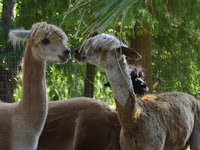 Alpacas - they're cute and they produce great fibre - what's not to love. Here are some of the Shi'Loh Alcapas I met in Florida last year.

Androids - I've always had a thing for androids - from Marvin the Paranoid to Data from Star Trek. I'm a geek, I admit it.

Acorns - not sure where this came from but I love the look of these and the fact that whole oak trees grow from them. Perfectly packaged little nuts.

America - Yes, I love all things American - the way of life, the climate (well, in some parts anyway), but mostly the people. Americans never do anything by halves. They just dive right in and immerse themselves in everything while we Brits are just dipping our toes in. People with great enthusiasm (bordering on obsession) are a delight to me.

Aran Jumpers - remind me of when I was small and we used to wear the ones my mother knitted for us. Now I appreciate the skill involved (and still love the warmth).

Aberdeen - my home town. Actually I only lived there from the age of eighteen until I was about twenty five, so only for about 7 years, but all of my family originate there and it if I were ever to move back to Scotland that's the area I would move to. The Granite City, the Garden City. Catch it on a good day - in the sunshine - and it's beautiful.