Project for the day was to turn this - 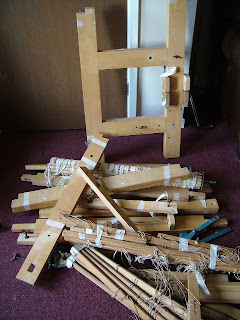 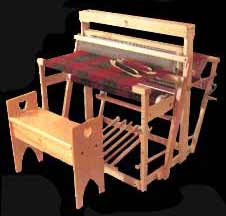 I had the help of the Evilpixie, who was wonderful and didn't seem to mind when I said that I thought we'd done it all wrong and we should pretty much start again. There wasn't even much swearing. 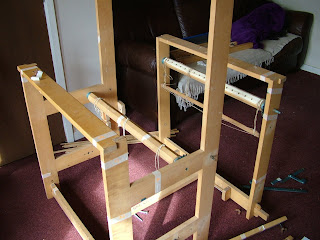 Here we are at the halfway stage, just getting to the discovery that it was all arse-about-face. And we did have these two odd bits of metal that we weren't too sure about - what were they and where did they go? 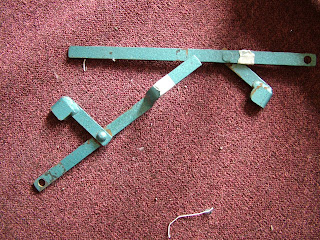 A quick email to the previous owner of the loom shed some light and we got it all sorted eventually. 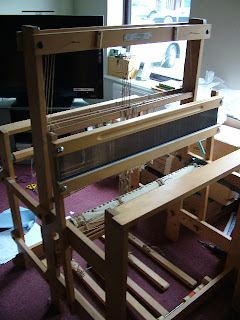 So here it is in all its slightly tired and shabby glory. It should fit in well around here. I've still got to tie up the treadles. I had to cut the treadle tie-up cords or it would just have been too complicated getting the whole lamm/ heddle/ treadle assembly onto the frame of the loom. I shall get some new cord, some plastic connectors and a new batch of texsolv heddles to supplement the ones on the heddles already. Then it will be ready to go.

I am delighted with my new loom and hoping to have lots of interesting weaving journeys with it. And I now have a really, really good understanding of how it works which is very handy.

Thanks to the Evilpixie for her glamorous assistance, to Bubba for keeping (mostly) out of the way, and to the previous owner for listing it on eBay, taking it to bits and sending it to me when I'm sure she'd rather I'd just pitched up with a van and carted it off.

I've managed to fit in a few books since my last post. I finished The Brass Verdict by Michael Connelly. It was good, as you would expect from a writer of Connelly's quality but legal thrillers are never really going to hit the spot for me. I liked finding out a bit more about Harry Bosch though and even Jack McEvoy put in an appearance.

Then I read Tempting Evil by Alison Brennan. This was for my crime reading group, though I didn't manage to get there to discuss it. Probably just as well. It was a thriller of a sort that I particularly dislike - a beautiful and talented main character, stalked by a psychopathic prison escapee, saved by an incredibly handsome and charming sherriff. Apparently this is part of a series she's written, all around prison breaks. Can't say I'll be seeking out any more of them. It wasn't particularly well-written and it had a gratuitous graphic sex scene towards the end that almost caused it to be hurled across the room (except it was a library book so I couldn't do that). There was no empathy with the characters and nothing surprising or original about it at all. Oh, and I still have no idea what relevance the title has to the book.

For a bit of a change I then read Touching Distance by Rebecca Abrams. This is a novel set in Aberdeen in the 1790s and is about a doctor who is trying to solve the mystery of why so many women are dying just after they've given birth. There's a lot of medical stuff in here but it's all fascinating. Alec Gordon is the doctor in question and he's fighting against the establishment, and against the ignorance and traditions of the local midwives. He's got a pregnant wife himself and is desperate to discover the cause so his wife won't be in danger too. I'd highly recommend this book for the excellent writing, period detail, fantastic sense of place and interesting characters.

While I was in Scotland (bookwise at least) I went a bit further north and devoured Red Bones by Ann Cleeves. This is the third in her Shetland quartet and it's a cracker. This book focusses more on Jimmy Perez's sidekick Sandy as the death that opens the book is that of his grandmother. Sandy is drafted in for his local knowledge of Whalsay, a very small island community that, of course, has secrets aplenty. I really liked the way Cleeves developed Sandy's character in this book and let us see Perez through Sandy's eyes. As usual there is the high quality plot and a wonderful sense of the remoteness and otherness of the Shetlands. I love this series.

Quite by chance just as I had finished Red Bones I got hold of a copy of Sacrifice by S.J. Bolton, also set on Shetland. This however is a very different place from Cleeves' islands. Tora Hamilton is a consultant surgeon recently moved to the islands with her Shetlander husband. She's digging a pit to bury her dead horse (as you do) when she finds a woman's body. There are Nordic runes carved into the body, just like the ones on a fireplace in Tora's cellar. Everyone keeps tells her to leave well alone but Tora can't help but get drawn into the investigation. I liked this. I'm not sure I'd like to live in her Shetland though - full of suspicion and corruption and prejudice. The plot's good though and the characters are mostly believable. I would certainly read another of her's.

Now I'm reading The Incendiary's Trail by James McCreet. I've only just started it, so it's a bit early to tell but it's off to a good start. It's set in Victorian London and seems to have an authentic feel and an interesting detective. More on that later.

Tomorrow I will be playing with lumps of wood and probably swearing a lot as I try and assemble the loom I bought. It arrived yesterday and currently resembles an explosion in an Ikea factory. It came with no directions and doesn't seem to be the same model as the downloaded directions I've got off the internet. Should be fun.
Posted by Pat at 5:34 PM 1 comment:

I have found my mojo.

But first, I didn't show you the pics of the fibery loveliness from last week. 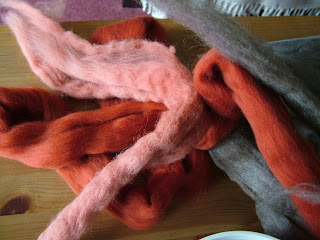 I turned this (some rust merino, some natural grey merino and some unidentified natural dyed stuff from our dye day last year) into this - 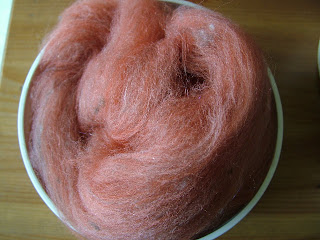 You can't see in the photo but it has gold angelina in it too so it's all sparkly.


I also made this 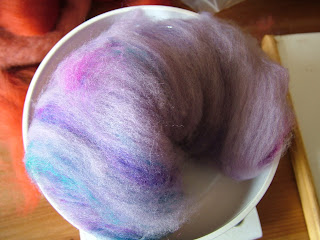 From some very dull and uninspiring mauve fibre I used to finish up the last of some purple dye I was using a couple of months ago. I added some turquoise and pink merino and some silver angelina and it will probably make some sparkly socks. So shoot me, I like sparkly things!

Lastly I made this 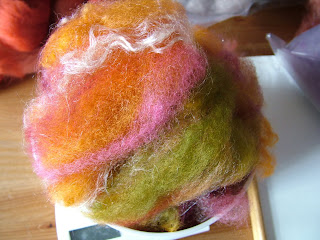 It's Corriedale fleece bought from Freyalyn at Wonderwool with a bit of added silk. I'm hoping it will keep some of the colour banding when I spin it as I'm planning stripy socks.


After all that creativity Bubba was worn out. 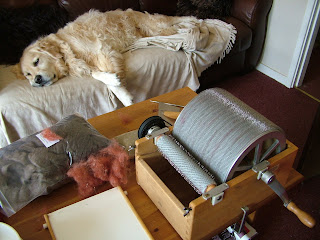 Now I'm wondering if I would really use a drum carder enough to justify buying one (I've been saving up for one), or if I should just borrow the club one if and when I need to use one. This would mean that I could put the money I've been saving towards something else. I'm thinking about a loom. I already have an Ashford Knitters Loom and a small 4-shaft table loom but I'm hankering after a nice wide foldable 4-shaft floor loom. I just missed out on one on eBay the other day - got outbid with about 6 seconds to go. Don't you just hate that!

So, I promised you FOs and indeed I do have them. Firstly there is this - 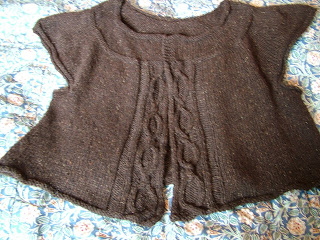 It's Loppem by Norah Gaughan knitted in Forsell Touch of Silk DK in basalt from Silver Viscount (it was on sale too!) Sadly they seem to not have any more of this at the moment as it was a very good deal. Luckily I have another 400g cone of the same colour and one of the black. Technically this is not an FO as I haven't added the buttons yet but that should happen this week so I'm claiming it anyway.

The other FO I have to show you is a shawl - 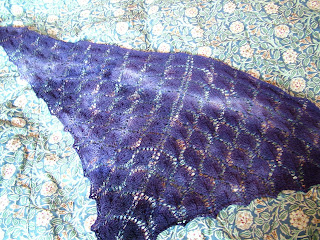 This is the Trinity Shawlette pattern available as a download on the P/hop website. I knitted it in Rowan Botany 4ply and then dyed when it was knitted. I love the pattern. I loved knitting it. Some people might get one of these for Christmas. The pattern is free and the idea is you should donate a sum towards Medecins sans Frontiers for the pleasure you get out of knitting it. I would highly recommend this pattern (though possibly not for a beginner, or if you haven't knitted a similar shaped shawl before because I (and some others) found the pattern a little hard to follow). Once you get started though it's a great knit and has several variations you can try.

Take a closer look at the detail. 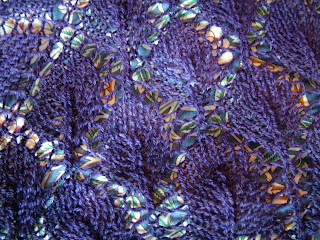 Oh, and I might have just accidentally bought a loom.