I've done loads of stuff recently that hasn't reached the blog for one reason or another - been busy, been weaving (see later), been lazy, yada yada.

Just after we came back from Brussels we had a day out in London, primarily for me to go to the Quilts 1700-2010 exhibition at the V&A, but we did some other stuff too.

The quilt exhibition was wonderful, filled with great work and fantastic inspiration. There are of course no photographs of this because photography is not allowed, but there's a lovely book to accompany the exhibition which is well worth a look if your local bookstore or library have it. The workmanship and detail of some of the quilts was breathtaking. I was less than impressed with the V&A itself which seems blithely to assume that you know where you're going and does not feel the need to signpost anything, though it does provide an incomprehensible map. One of the attendants was very rude to Pete, who was carrying my backpack (no bags in the temporary exhibitions - but also no obvious cloakroom where it could be left, unlike in the Brussels Museum of Modern Art.) I was misdirected twice by members of staff. It just took the edge off what should have been a wonderful morning. A lot of the textile exhibits were not on show for various reasons which seemed a shame when there were so many textile lovers in the building. Still the quilts were fantastic and they were the main point of the visit.

After that we got on the tube up to North London and went to the Handweaver's Studio so I could get some weaving yarns. Mission accomplished. What a lovely shop. I'll love to do a workshop there, having seen all the looms and equipment they have as well as all the pretty yarns of every colour imaginable.

Holborn was our next stop where we had a spot of lunch and visited the Cartoon Museum. This is well worth a visit if you happen to be in London. On the ground floor it currently has an exhibition on Ronald Searle and some examples of cartoon art going back to the 18th century. Upstairs they have some comic art from the likes of Leo Baxendale, Ken Reid etc with original artwork from The Beano, Dan Dare, 2000AD etc. It's all great stuff, I just wish there was more of it on display. It was the Easter holidays and there were lots of young people doing workshops in comic art which was great to see. As I said the museum is well worth visiting if you are in London already, but probably not worth a journey in itself. It's a start but we need more of this!

At the end of that week I went to the National Exhibition of the Guild of Weavers, Spinners and Dyers which is on at the Mueum in Mansfield. It's full of fantastic work, very inspirational. I did take lots of photos for my own reference but don't feel I can post them on here for copyright reasons. If you're in the area I'd recommend the exhibition if you're at all interested in textiles.

It's been so long since I did a book update that I'm not sure I can remember what I've been reading. With me on the trip to Brussels were Blind Eye by Stuart MacBride and Fever of the Bone by Val McDermid. I started with the Stuart MacBride and really enjoyed it. It's a bit gruesome in places but as usual the characters are interesting and the plot worked well. I didn't get such a strong sense of place from this one as some of the others; while still set in Aberdeen it could easily have been in a number of other cities in the UK. Perhaps it was because it was set during a heatwave - very un-Aberdonian! Still you always get a good read with these and as his next one is out this week I shall probably read that fairly soon. The Val McDermid was my back-up book on this trip - I wasn't impressed with her previous Tony Hill book, Beneath the Bleeding , but this one was much better. Well written and tightly plotted, this book is about a string of abducted teenagers. These later books while still good don't have the impact of Mermaids Singing or Wire in the Blood and are much less gruesome. I wonder if this is so as not to alienate people coming to the books from the TV series, or if it's a deliberate move away from that excruciating detail that made you want to read the early books with your eyes shut. I've read some books where the nastiness seems gratuitous and voyeuristic and it's not a direction I feel crime writing needs necessarily to go in, but McDermid's books, although sometimes grim and uncomfortable reading, never felt voyeuristic to me. I'd still rank The Mermaids Singing as one of my top 10 crime novels.

Back soon with part two of the big catch up!
Posted by Pat at 9:52 AM No comments:

What I did on my holidays.. and a bit of a rant

I'm back from Brussels and we had a totally fantastic time there. 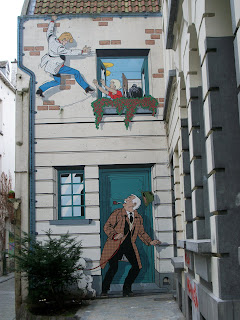 We did all sorts of touristy things - eating Moules Frites and drinking beer in pavement cafes, and eating frites with mayo in the street. We walked for miles and miles through the streets of Brussels looking at the comic strip murals, checking out fleamarkets and browsing in antique shops, second hand bookshops and comic shops. We went to the Museum of Modern Art and the Museum of Comic Strips. We ate bouillabaisse and drank lots of coffee. It was pretty much the perfect weekend. We totally loved Brussels. 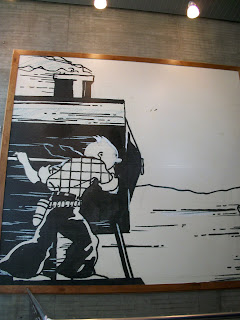 There were a couple of highlights - the fleamarket at the Place de Jeu de Balle which is on every day from about 7am. We went on Saturday and Sunday (because there's nothing we love better than a good fleamarket) It takes place in a square and it's just filled with people selling (mostly) tat out of boxes - there is everything here: comics, books, furniture, postcards, buttons, art, photos, spectacles, laboratory equipment (need some pipettes - this is the place), astounding collectables and all manner of unidentifiable stuff. Most of it seems to be straight out of house clearances - everything just shoved into boxes and brought here for sale - we saw biscuit tins with the biscuits still in them, the contents of kitchen drawers, people's whole lives spread out to be pawed through by the dealers and the curious. We loved it. And if you ever wanted to replace a missing bit of a chandelier then this is the place to come - whole stalls of bits of chandelier!

The other big highlight for me was the Museum of Comic Strips. The Belgians love comics. They seriously love their comics. I've never seen so many in one place (there are apparently 49 comic shops in this one city). The Museum has a great display of all the greatest comic artists from Belgium comic history - Herge you would probably have heard of, Willy Vandersteen you might know, but there were many many others I'd never heard of who were just amazing. And the museum doesn't just celebrate the founders of this great industry (and it is still a great industry in Belgium). It has original artwork from comics right up to the present day and they have a huge rolling display of pages of this original art which changes continually, on rotation so that the paper is not exposed to too much light. I have discovered a new found love of E P Jacobs, whose Blake and Mortimer series I knew of, but seeing some of his artwork up close in the museum just blew me away. Hardly any of this stuff gets translated into English which is a shame as I saw some fanstastic stuff, old and new, that would go down a storm here.

Also at the museum was an exhibition about Tove Jansson, creator of the Moomins. There was beautiful original art here too. You may (if you are old enough) remember that she did a comic strip of the Moomins for the London Evening News from 1954 to 1959. Sadly, none of the art for that particular series survives as it was all destroyed by Associated Newspapers. And this demonstates the difference in importance placed on comics in the UK compared to Belgium.

Much of the artwork for early British comics no longer exists, destroyed as worthless as publishers disappeared and publications were merged. The one British publisher who holds a big archive is D. C. Thomson, publisher of The Beano, The Dandy, The Beezer, Bunty, Mandy, Warlord and Victor. They published all those comics you grew up reading. They also publish The Sunday Post - home of the Broons and Oor Wullie. They've been publishing comics since 1921 and they have a huge archive. But do they make anything of this huge, fantastic resource? No, they do not. Is this wonderous stuff available for the public to see? No, it is not. Is there a museum where you could go and learn about the early days of comic books in the UK? No, there is not. Don't you think we ought to celebrate the people who brought us all so much fun and laughter in our youth. Don't you think we should have a museum blowing the trumpet of the great comicbook artists and writers produced in this country. Would you go to someplace like that? I know I would.

Just in case you all thought I was some kind of knitting goddess (hardly) I've been brought down to Earth with a bump recently with my kntting. Several projects have fallen by the wayside.

First there were the Cookie A socks with which I was challenging myself - they were frogged due to gauge issues and have never been restarted.

Then there was a shawlette in some handspun that I have finished but it has no drape at all, it's just as stiff as a board. Seriously you could hang-glide with that sucker.

You may remember that I started a pair of Skew socks and I got past the heel and halfway up the leg before I realised that they weren't even remotely foot-shaped. Gribbit.

I'm now back on a pair of simple top down plain old boring socks. I needed a small portable project that I can knit on the move as we are off to Brussels tomorrow. It's my birthday this weekend so we're looking forward to a trip involving beer, comic strips, flea markets and moules et frites. Not sure if there will be any wool shopping, but you never know.

See you when I get back
Posted by Pat at 8:19 PM No comments: