A Pile of Booty

I never did update you on what I managed to buy while we were in Scotland.

There was this, not inconsiderable, pile of crafty books - 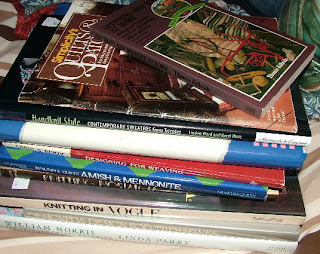 There's, from the bottom, a lovely book on William Morris and the Arts and Crafts Movement, Designers Design for Themselves which is about American Arts and Design, Knitting in Vogue (Patterns from the 1930s to the 1980s), Knitting Nostalgia - Knitwear 1920-1950, Amish and Menonite Quilts, Designing for Weaving, The Knit Kit, Handknit Style, Simplicity's Quilts and Patches, and finally Spinning and Weaving at Home which includes instructions for making a spinning wheel out of a bicycle - not sure I'll be trying that but it's a interesting book anyway. 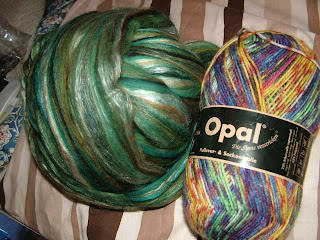 That's 200g of merino in lovely tones of green and a ball of the brightest Opal sock yarn I could find. I have to say that stash enhancement opportunities were few and far between. I had a vague plan of buying some Jamieson & Smith shetland in various colours with the aim of some fair isle knitting but I never actually saw any in any yarn shop I was in. Sadly it seems that yarn shops in Scotland have fallen by the wayside exactly as they have in England. Perth didn't seem to have a yarn shop at all, most of the other shops I was in were full of acrylic stuff and baby yarn. Twist Fibre Craft Studio in Newburgh was a beautiful shop, with lovely stock (and it was there that I bought the things pictured above), but by and large I was disappointed with the quality/choice of the yarns available elsewhere. I'd got it in my head that there would be lots of great yarn shops lurking in the many places we visited but alas this was not to be. Maybe we were in the wrong places, or maybe our timing was bad - certainly there were shops I knew about that we didn't get to because we weren't in the right area when they were open, or we just didn't have the time to spare to make a detour. Probably just as well - if they'd all been great shops I'd be bankrupt!

Next post on Monday hopefully, when I will be reporting on my trip to London on Sunday - to a comic fair primarily - might manage to squeeze a yarn shop in somewhere if any are open on a Sunday.

Also I have exciting news about something happening later in the week, which involves another trip to London. I have such a cosmopolitan lifestyle.

We are home again after our little (but very busy) trip into the Northlands.

Sadly I was unable to take you along with me due to the lack of internet access up there. I'd planned to blog a little every day but it was not to be so you'll have to make do with a few update posts.

We left here early on Sunday morning and after negotiating the many sets of roadworks on the M6 (there were 10 lots of roadworks between Birmingham and Carlisle!) we arrived in Glasgow where we spent a couple of hours mooching around the Barras market. 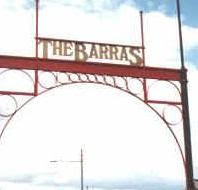 It's a funny old place, a real mix of stuff - secondhand books, antiques and all sorts of new tat. We always enjoy a wander around though even if we didn't really buy very much. Getting out of Glasgow proved a tad more difficult than we expected as they seemed to have removed all road signs directing anyone East and also closed some of the on-ramps to the M8. We got away eventually but it was very frustrating.

We were headed for Perth where we based ourselves for a few days while we explored round Fife, Perthshire and Dundee. Highspot of the stay for me was a trip to Twist Fibre Craft in Newburgh where I bought some fibre and some sockwool. Pictures of this to follow.

On Wednesday we headed further north to meet up with some friends we hadn't seen for a very long time. By this time I was beginning to remember all the things that irritate me about Scotland - the lack of decent places to eat, sketchy internet access, the scarcity of decent coffee, the terrible roads. If you'd asked me on that morning if I would ever move back to live there I'd have said you were mad.

However a couple of very busy days in the North East near Aberdeen soon had me back in love with that part of Scotland at least. Aberdeen is such a vibrant, cosmopolitan city and the Moray coast is just beautiful. We spent a day exploring along the coast with K&D, our very lovely and hospitable friends. Portsoy in particular is just amazing. 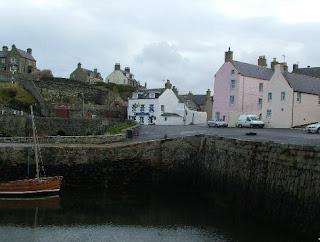 I really wouldn't mind living somewhere near there. 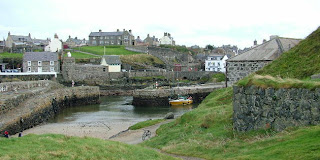 We had a fantastic time and it was great to meet up with K&D. Apologies to everyone else up there who we didn't manage to get hold of - time was very tight - but we promise we will be back sooner rather than later.

We didn't manage to get as much done as we had originally planned, and there were lots of people we'd love to have got together with and didn't, but we had a really great week (though with hindsight we should have gone for longer - there wasn't a lot of downtime in that week - we were on the go most of the time.) Ah well, there's always next time.

No News from the North

Internet access is a bit sketchy here so you'll have to wait till later in the week for my scintillating report on The Barras market, roadworks and charity shopping.

Just a quick post as I'm in the throes of packing for our trip to Scotland and tidying the house and generally getting organised. I'm usually very particular and have lists and things about what needs done and what I'm taking etc but I am totally flying by the seat of my pants here and just throwing some clothes in a bag and hoping for the best. I'm especially hoping it's not going to rain much as I can't seem to find a waterproof jacket in the house anywhere.

So my final choice of holiday reading is this.

Written in Bone by Simon Beckett - it's set in Scotland, though not in any part we'll be in - it's an isolated community, with dark secrets and a murderer in their midst....and a big storm coming. Sounds just right to me.

The other is Library of the Dead by Glen Cooper, which is a Dan Brownesque thriller but with books - I suspect it's a bit of hoary old tosh but sometimes that's just what you need - especially on holiday.

Just two books, I hear you cry! Ah yes but the chances of me being in at least one secondhand bookshop, and probably a few other bookshops too, are quite high. Bit of a certainty. I'll keep you posted.
Posted by Pat at 6:09 PM No comments:

I've not been posting...mostly because I've not done anything interesting enough to merit a post, which is sad.

It seems there are only so many posts you can make out of going to work, coming home, walking the dog and then vegetating in front of the TV.

However, next week we are off to Scotland for a short break. We're hoping to start in Glasgow, spend a day in Perth, swing though Fife, go to an exhibition in Dundee then meander up the east coast to Aberdeen where hopefully we will be able to meet up with some people we've not seen for a very long time.

As usual we will be visiting secondhand book shops, charity shops, wool shops, comic shops and anything else that takes our fancy so I hope you'll join us through the medium of the blog and I promise I will try and take lots of photos of where we've been.

Now I'm trying to get the house into shape ready to be left in the hands of the Evilpixie for the week, working out just how little I can get away with in terms of packing (so there will be more room for booty) and selecting my holiday reading.

Holiday reading for me needs to meet the following requirements -

I'll get back to you later this week with my chosen books - let's see if they conform to my guidelines (you will note that these are already, mere sentences later, referred to as guidelines, not requirements - anyone would think I was a politician)