We've a creative week here. Look at the evidence - 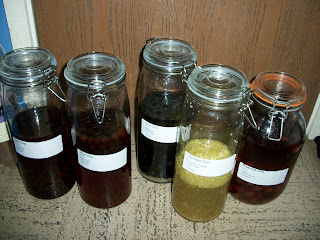 That's (from the left) 3 jars of sloe gin, 1 of ginger gin and 1 of damson gin. We're looking forward to a very Merry Christmas. :)

We have enough sloes picked to do 2 more bottles. Then we'll have to go and pick some more. The damsons came from a friend in my spinning group, and the ginger gin recipe is courtesy of my SIL Rosemary who gave us some of her own gorgeous ginger gin when we stayed with her recently.

Now we need to find a source of little bottles so that when it's ready we can bottle it up for Christmas.

Long time readers will know that I am not a fan of Booker books. In general I find them to be pretentious, over-written and lacking in plot. (You can see that I'm not sitting on the fence here.)
Anyway, I've actually read 3 of the longlisted books this year and had selected the next three that I wanted to read and guess what - the only one which made the shortlist was the one I have liked the least so far. In fact five of the six that I liked the look of didn't make the shortlist.

For the record I read The Last Hundred Days by Patrick McGuinness (it's wonderful, you really should read it), and The Testament of Jessie Lamb by Jane Rogers. I liked this one too but not as much as TLHD.

The others that I was tempted by were Derby Day by D J Taylor (I shall probably still read this), On Canaan's Side by Sebastian Barry and A Cupboard Full of Coats by Yvette Edwards.

The one I read that got shortlisted was Snowdrops by A D Miller. It's on a similar theme to TLHD, a young man adrift in a foreign country, but not nearly as well written and entirely predictable. I really was not impressed by it at all. However given my form with Booker books it should really be no surprise that anything I wanted to read, or liked would stand no chance of winning. Publishers should probably make note of this.

Ok, I took a short break there as Pete came in and said he'd found some ripe sloes where we walk Bubba so we nipped out and picked a couple of kilos. We love a bit of sloe gin, and we already have some damson gin in progress. A couple of weeks ago at Pete's sister's we had a little libation of ginger gin which was gorgeous so we shall be trying our hand at that too.

So back to the books - what do you think will win? I might try the Julian Barnes, on the grounds that it is quite short. And I understand Patrick Ness is tipping The Sisters Brothers. I just don't think I should put the kiss of death on any of them.
Posted by Pat at 2:16 PM No comments: