So, after our damp Sunday in North Devon we stayed overnight again in Taunton and spent Monday morning scouting out the charity shops of Taunton. 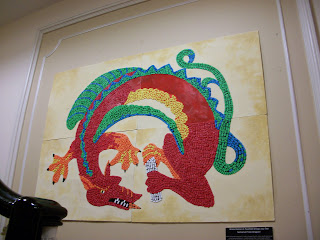 
Then we hit the motorway and went south to Exeter, along the coast to Exemouth. Did you know that Exemouth has an amazing 12 charity shops? I don't think we actually bought anything in any of them, but there were loads. Sidmouth next, which is a pleasant little town with lots of little galleries etc.


I do have one thing to say about all these places. Don't you think they should be encouraging people to stay as long as possible and browse happily without having to watch the time because they only have 2 hours in the car park? If the parking was free people would be more inclined to stay and shop, wouldn't they? I hate to think how much we spent just on parking in the week that we were away.

Anyway, after Sidmouth, where we declined the overpriced room in a seaside hotel (who would obviously rather the room was empty than offer a reasonable rate), we hopped inland to Honiton where we booked a room in a hotel/guesthouse via my iphone from a layby just outside Honiton and the delightful, if slightly eccentric, Thai lady owner was all ready for us twenty minutes later when we arrived. I love my iphone.

Next morning in Honiton was market day - and they just set up the market all along the high street at the side of the road, with no worrying about the traffic.


From Honiton we moved on to Poole, where we had a lovely icecream on the front from a very rude woman. If she worked in my shop she'd get a rocket up her arse, I can tell you. The icecream was nice though. :)


There was a little bookshop in Poole with interesting stock, though we didn't buy anything, but he recommended their other shop in Bournemouth, which was the direction we were heading anyway so we got very lucky in that shop. Pete bought some graphic novels. They had a lovely selection of craft books too but nothing that I didn't already have. It's Winton Bookshop in Cardigan Road in Winton, Bournemouth. The chap who runs it was a total delight. Very knowledgeable about his stock and really helpful. We could have chatted to him all day. It's not very often you can say that about second-hand booksellers. Anyway I highly recommend them. They're well worth checking out if you happen to be in the area.


We spent that night with Pete's sister in Gosport and the following morning we did Fareham, Chichester and Arundel before heading for his other sister who lives near Horsham.


Thursday we went to Brighton where we had a good mooch along The Lanes and drank a lot of coffee and walked along the prom. The pier looks very sad. We had a really good day, just wandering around aimlessly looking at the lovely little shops and galleries.


Friday was Pete's birthday and had booked the Eurotunnel to Calais. We were hoping to find a local flea market but working on duff information from the internet the only market we found was a general one, though we did have a fantastic cup of coffee in one of those surreal little cafe/bar establishments with odd local people in that only seem to exist in small French market towns. Back to Calais then where we managed to avoid the traditional row about directions and who is the better navigator and why can't the French put proper signposts up. We got well stocked up on wine and cheese and other goodies as you can imagine.

So we got home late on Friday night, totally exhausted.

And here is my haul of crafty stuff - 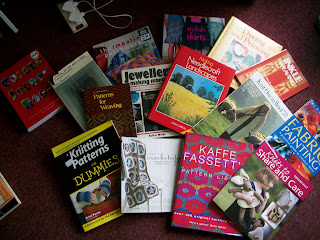 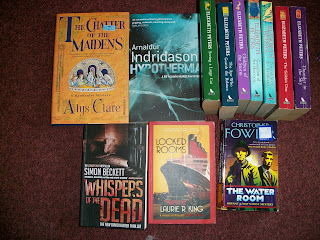 And the crime books. You may be able to see that I am on a bit of an Elizabeth Peters kick. How odd - no serial killers. 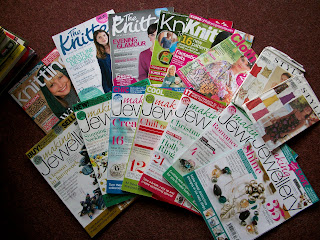 and the magazines. I bought some bits of fabric too in Bath but they're not in the photo for some reason. 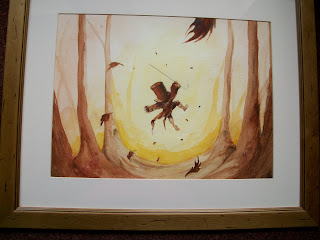 And this is our painting, bought in Ilfracombe. Again it is by a Devon artist called Kevin Powell. Here's a close up of the little man. It's called The Leafkicker. 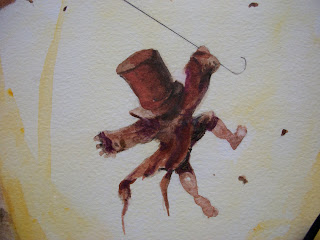 We woke on Sunday morning to pouring rain. It was absolutely torrential. That rather scuppered the plans we had made to hit the car boot sales round Taunton. Instead we headed for the coast.

We started in Ilfracombe where we had a huge breakfast in a little cafe called Pandoro - lovely fry-up, very friendly place.

Just up the road was a little gallery with an exhibition by the local art society and let me tell you the quality of the work was outstanding. We bought a watercolour by a local artist called Kevin Powell. Most his work is of dragons, but the piece we bought is different. I'll post a picture when we get home - It's safely wrapped up in bubblewrap at the moment. There were some other pictures that I really liked too including some by an artist called Aline Forde - abstract seascapes using mixed media. There was even some beautiful knitting. The exhibition was quite a find and far above the usual local art exhibitions.

We walked around Ilfracombe, along the prom and down by the harbour. Some of the colours and textures in the rocks were amazing 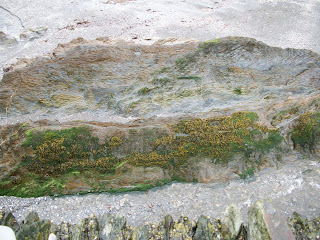 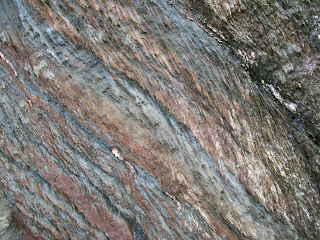 We were pretty damp by this time and it was still raining so we skipped down the coast to Croyde where even the surfers weren't out. We did have some ice cream though.

Coldharbour Mill is an 18th C wool mill which still works. Sadly it only operates a few weekends in the year and this wasn't one of them. However it was still fascinating to see all the ancient spinning machines and looms. I'd really like to go back and see it running. The displays are very interesting and I particularly liked the upstairs part where the local weaving society meet and all their looms were set up. This part is closed off so you can't go in, but I had a good peer at them from the sidelines and there are some lovely looms there.

So that was our soggy Sunday in Somerset and Devon. Taunton it should be noted does not seem to eat out on a Sunday evening. We had a bit of trouble finding a restaurant open. Midlands people eat out regularly on Sundays, but I guess Somerset people don't as most of the restaurants we saw were closed for the evening.

The internet access in Somerset was a bit hit and miss so I'm a tad behind with the blogging but here's what we did on Saturday.


We were up early as usual and off to Bath. It only takes 1.5 hours from home which surprised me. The M5 was pretty quiet though.

It was a lovely day and we had a great time mooching about and finding lots of interesting shops. We started off with a coffee in Starbucks – they have posh mugs in the ‘Bucks here. 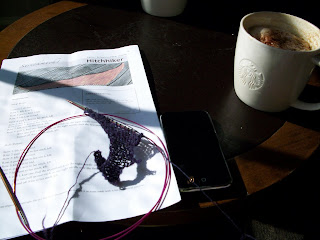 I knitted a couple of rows on my Hitch-hiker as it was WWKIP day.

There are a couple of stand-out book shops in Bath – Mr B’s Emporium of Reading Delights and Topping & Co Booksellers. Both of these were stocked to the rafters with books to drool over – lots of lovely art and textiles books. We had a great lunch in a little pub in one of the little lanes, great fresh sandwiches and homemade chips. 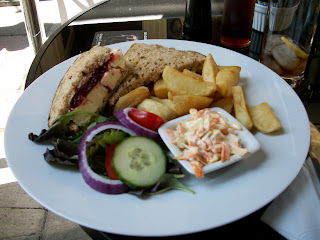 I stopped into the Makery and bought a couple of bits. And I found a great weaving book in a charity shop. I'll do an update of my purchases when I get home and show you my total haul.

After lunch we headed out and went to Midsomer Norton, Shepton Mallett, Glastonbury and Street, where we went to the Clarks Outlet Village (but I didn’t buy anything). The charity shops of Somerset were not very forthcoming with their goodies. I don't think we bought anything in any of these places.

We spent the night in Taunton, ready for the next day’s adventure.

I know, I know I'm just rubbish. I seem to have been so busy recently that I've done hardly anything except go to work, come home and veg in front of the TV, and really that doesn't make for very good blog material.

However, we are off on one of our little trips this weekend. We start off in Bath then we spend a couple of days in North Devon, across to Exeter, along the south coast and ending up with a day trip to France. It's just Pete and I - the Evilpixie (who was 21 this week - eek how did that happen) is house/dog sitting. It's been ages since we went away anywhere so we're really looking forward to it.

Internet service willing I shall blog as we go and will try and take some interesting photos if I can. In the meantime - bookshops, wool shops and car boot sales of the South West be prepared - we're coming your way!
Posted by Pat at 5:36 PM No comments: