Yes, I actually have an FO to show you. 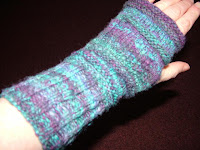 Fraserburgh Armwarmers to a pattern of my own devising, named after the fishing port in the NE of Scotland where in their gansey knitting they have traditionally used the tree of life pattern featured in the back panel of each mitt. I have happy memories of Fraserburgh as when I was about 10 we had a great family holiday there and I won third prize in the sandcastle building competition. The yarn is my own hand-dyed, handspun merino of approx double knitting weight.

I can't remember what I was reading last time I blogged, but I seem to recall a rant about the standards of crime fiction. So, anyway, I finished The Dead Pool by Sue Walker and am now reading Dark Angels by Grace Monroe. Contrary to my expectations I was somewhat underwhelmed by The Dead Pool, but am becoming increasing enthralled by Dark Angels. Both are set in Edinburgh (as have been rather too many of the crime novels I've read this year), although both feature a different side to Auld Reekie, and a different one again to that presented by Ian Rankin. But I'm becoming rather bored with Edinburgh for all its many guises and am longing for a Scottish novel set in Dundee or Inverness or the Isle of Skye. How about a rural murder in Blairgowrie? A lurid laying-waste of life at The Lecht ski centre? Watery doom in a salmon farm near Oban? Please anything but Edinburgh............

I have been shamefully neglecting the blog. Don't worry though that I have been so entranced with the other blog (you know the writing one) that I have spent all my time hanging out over there having a great time. That would not be true. It has been just as badly neglected as this one.

Truth is I just haven't had much to write about. Life is a bit dull at the moment and I am sadly lacking in blog fodder.

Last week I had a few days when I almost decided to give up reading crime fiction. (It's Ok the feeling passed off after a few days). I had read several rather disappointing crime novels in a row - they ranged from the "just not very inspired, quite run of the mill" through to "downright awful, how did this get published?" I was beginning to despair. I want crime novels with a decent plot. I want crime with credible characters. I want a protagonist that I like (at least some of the time) and can identify with. While I'm at it, can I have a novel where one of the detective/police/whatever team doesn't get targeted by the serial killer. Please. It's the crime novel equivalent of that old horror movie scene where the girl is going to open the door and we're all shouting "No, don't open it." One well-known, and previously well-respected (by me anyway) writer telegraphed her intentions about this so clumsily in her latest book that I thought it must be a McGuffin. I was horrified to discover that it was actually a major plot point.

However, I had some proofs come through for review for Eurocrime so I did read another crime novel. And I have several more still to review so I guess I'm back on the horse. I swear though that the first time the detective/protagonist puts their hand on that doorknob, I'm giving up crime fiction for good and taking up chick lit!!!!
Posted by Pat at 2:24 PM 1 comment:

I'm having one of those weeks where I can't settle to do anything.


I've started at least 3 books and put them down again.

I've started a couple of new knitting projects and put them down again.


I've done a bit of spinning, and a bit of dyeing. Mostly because I want to knit this -

Its the December Lights Tam from Interweave Holiday Knits 2007. However it requires 8 different colours of yarn which could get expensive, especially as you don't seem to need very much of some of them. But I have some lovely bright red merino in the fibre stash, which I've almost finished spinning and I've dyed some bright green this afternoon which I can blend with some other greens from the stash to make up the 4 different greens required. I've got some rose that I dyed earlier in the year and can mix up some magenta. Then I just need a little blue and I'm sorted.

The weather has taken a distinct cold turn here and I am consumed by the need to knit warm mitts and hats. If only I could settle on which ones to knit!

Whatever happened to Bonfire Night. When exactly did it expand to encompass the entire weekend before (and probably after) November 5th?

Last night it sounded like we were in a war zone. Why do fireworks have to make noises like nuclear bombs? I can see the point of the pretty sparkly ones but why must they be so ear-shattering.

When I got home from work yesterday, Bubba was very agitated as the fireworks had already started (it was 17.45pm). He wouldn't go out in the garden and he spent the entire evening on the sofa, as close to me as he could get. I couldn't go to bed until most of the noise had stopped, which meant a very late night indeed. (I draw the line at a dog in the bed which was my other option!) Poor dog.

I'm a firm believer that the sale of fireworks to the general public should be banned. I think they are too dangerous for use in gardens. I have no problem with properly organised and licenced displays but the kind of fireworks that were going off all around our house last night were not the kind that I would have liked my children anywhere near, and which I would never dream of touching. These were not the little catherine wheels and small rockets my dad used to set off on Guy Fawkes Night when I was a child. These things are huge. I think it's a job for the experts. Children get maimed and killed at home firework parties every year, not to mention the thousands of traumatised pets and wildlife.

If only properly licenced displays were allowed then people would be safer. I would be able to plan to be with my dog while the display was on, instead of having to stay in and reassure him almost every night for two weeks.

I'm guessing there will be more of the same tonight and Monday and probably through to next weekend too. Then we'll just have the fireworks for Eid, Dhiwali, Christmas and New Year to contend with. Wonderful.

Can you tell I'm feeling grumpy and miserable this morning?
Posted by Pat at 10:38 AM 2 comments:

The first bit of the novel now titled "The Riddle of the Stars" is online here. Go have a read.