I just realised that it's nearly the end of September - meaning that Project Spectrum is drawing to a close and I haven't done any of the requisite coloured books for this section. 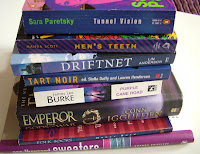 Tunnel Vision by Sara Paretsky - Paretsky was the first female detective I ever read so the subsequent ones had a lot to live up to. She's the main reason behind my crime obsession, though her later novels haven't quite done it for me.

Hen's Teeth by Manda Scott - Manda's first book, and she's got better since but it's still good (and set in Glasgow, which I almost always like).

Driftnet by Lin Anderson - another first novel set in Glasgow and very good indeed if a tad on the dark side if I recall correctly.

Purple Cane Road by James Lee Burke - I know I've probably said this before but I just love his prose - it makes you want to roll naked in it. (I think you can be arrested for that though.)

Emperor: The Gods of War by Conn Iggulden - the final part of his fictional life of Julius Caesar, and excellent reading.

One Thousand Sweaters by Amanda Griffiths - great mix and match pattern book covering just about every type of sweater and variation you could think of.

Honorable mentions for the two books I wanted to put in this photo but couldn't find - The Grave Tattoo by Val McDermid (very purple cover) and The Color Purple by Alice Walker (just because it's a wonderful book and I've read it many times).

Sometime in the next two weeks I'll cover the last two colours - orange and brown.

I am currently luxuriating in the prospect of two days off in a row (heaven) and trying to decide whether I should go and try to spin something impressive (unlikely) to take to the first of my classes on Wednesday, or to go and play with felt. Or there's also the (remote) possibility that I could find a half-decent film on Sky and just chill out for the afternoon. We'll see......
Posted by Pat at 2:23 PM