I did manage to get some knitting done this week despite the number of days I was working. So there is progress on the Snowflake socks - 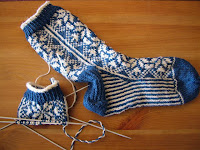 One finished and the second one started. 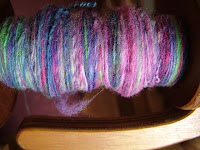 It's lovely but there's not a lot of it. I shall have to ply it with something else to produce enough to knit anything with. I'm thinking of plying it with a plain pink or purple and making some handwarmers. I've been dyeing again this afternoon (and I have the blue fingers to prove it) and this time I've gone all dark and moody. Photos later in the week once I've washed and dried it.

I am no longer reading The Interpretation of Murder. I'm sorry but I didn't finish it. I got so exasperated that I hurled it into the back seat of the car in disgust. (It's OK I wasn't driving at the time!) It had been irritating me for a little while but I came to a particular plot construct that just took the biscuit and I refused to read any further. People who have read it may feel free to speculate what it was that annoyed me. I understand that some people (who's opinions I normally trust with regard to books) thought this was a great book so I'm not going to spoil anyone's enjoyment of it by telling you what happened. But I bet if you read it you'd feel the same as me at the same point. I believe my exact words were "Oh, for God's sake, no, no, no!" The people in the car next to me in the car park at the time may have thought I was a little mad.

As an antidote to this I read A Crime in the Neighbourhood by Suzanne Berne, which I believe won the Orange prize a few years ago. It was an interesting but ultimately disturbing book. Very well written. Not really a crime novel as such, though there is the aforementioned crime in the neighbourhood. It's really about the effect that this crime and some others events have on a quiet street in America in the 1970s.

Now I am reading Emperor: The Gods of War by Conn Iggulden. It's the last in the Caesar quartet which I have enjoyed immensely.
Posted by Pat at 6:10 PM

i hope that you have done those socks in a size 8 for me!
Debbie (the rebel sock knitter!)