Not long after I left Waters*&)>s we realised that me working from home meant we would be able to fit a dog into our lives again. 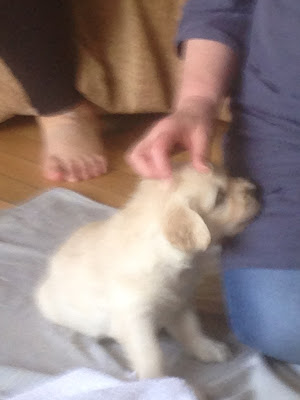 Sorry if the pic is a bit blurry. He didn't stay still for long when we was that size - he's about 4 weeks old here (the day we first met him when he was still with his mum).

Eventually he was old enough to leave his mum and come home with us and that's when the fun started. 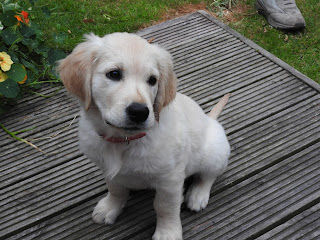 Isn't he lovely. He looks like butter wouldn't melt in his mouth. Do not be fooled!  This dog is a complete nightmare.  He eats EVERYTHING.  Even now when he's 18 months old and pretty much fully grown, he still eats things like you would not believe. He eats socks, tissues, paper, shoes, books, records, absolutely anything plastic - plant pots, watering can, bucket, hairbrushes, pens.  He is a one dog wrecking crew.  He's chewed the corners of the kitchen cabinets and all the knobs on the dresser.  The dado rails have even sneaky toothmarks.  He loves to eat wool - I've lost several balls and cones - some from a box that had just been delivered and has still mostly sealed up.  And he's a digger. The lawn is a series of holes or varying depths - I swear you can see Australia though his favourite one.

He's a regular Houdini too. We had to have new fences built in the garden to stop him escaping into the neighbours gardens. He just loves to be on the other side of any fence, hedge or gate he comes across. He once managed to get into the Wolverhampton Wanderers training ground and then couldn't work out how to get back. I had to get one of the groundsmen to let him out through the gate.

We just could not have found a dog that is more completely different to Bubba. Finbar has separation anxiety and used to cry like a baby if you left him.  He's better at this now but it took a long time.  I can't leave him in the van while I drop off a parcel or he howls.  This is a slight improvement - he used to howl whenever I put him in the van - to go for a walk even.  We tried using a crate when we first had him but he howled and howled until we let him out.   We had to give up on that idea.

The Evilpixie taught him to splash in muddy puddles so now he is permanently wet and muddy. 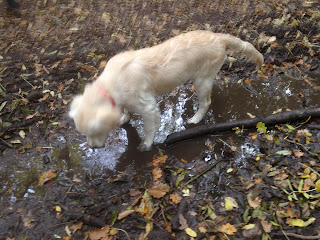 Of course we love him to bits - he's a lovely dog and he loves to give hugs.  When he was a little pup his favourite thing was to sit on your head. He's a bit big for that now but he'll still try if you're not paying attention.  Also as a retriever he's a bit of a fail - he doesn't like swimming (paddling is OK) and he doesn't fetch things no matter how much we try and teach him.

I think I thought he'd be much the same as Bubba - very chilled and laid back,  and instead we have this whirlwind of utter naughtiness. He really keeps us on our toes. We are so very glad we got him.

Well, when I posted last (over 3 years ago!) I really did not plan on stopping posting. Somehow life and work and all of that just got in the way and all sorts of stuff went on in my life that I really didn't want to have to think about enough to write it down.

Today, for the first time in very long time I thought about this little blog and how much I had enjoyed doing it. So here I am.  Forgive me for abandoning you.

My life has changed so much in the last 3 years so I'll do a little catch up - we did move house eventually, to Wolverhampton as I thought we would. I love our new house. It's a beautiful Edwardian semi-detached with lots of lovely period features and lots of space.  I have a craft room - I'll do a post but I'll need to tidy it up a bit first.

We have a new puppy. The lovely (but very naughty) Finbar came into our lives last year  He's a lovely dog and not at all like Bubba, our previous goldie.  More on him to follow. 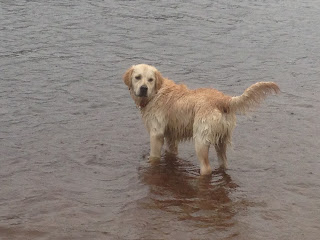 I no longer work for Waterstones. I'm not going to go into what happened and why I left but I am really glad that I did.  After I left there I set up WV Books and Vintage and now I sell books, records and collectables on eBay.  It's a lot of hard work but it's great fun and I love doing it. You'll probably hear quite a lot about what I'm doing and what I've found.

Somewhere around the time I left Waterstones I realised that I had lost my love of books. Scary, huh?  It has taken me over a year to re-discover that love but this week I actually think I have found my way back. I am reading different things now.  I am no longer a great lover of gritty crime novels. I've been reading a lot of fantasy and science fiction, and quite a lot of historical crime - I still like the mystery, I just can't cope with the endless violence any more.  I'm looking forward to writing about books and about reading, and even this week I have contemplated writing again. It feels good.

I am still knitting, still spinning and weaving. I have a new loom which I will share with you when I get a moment.

Let me just say that I am glad to be back. I can't say that I will post every day, probably not even every week but I will dip in and out as time and the need to say something allow.
Posted by Pat at 2:03 PM No comments: