I can't believe it's Monday again already and I don't seem to have done much and I never did get around to my promised post from the end of last week.

Here anyway are the before and after pictures of the wet-finished yarn I was playing with. I'm not sure there's all that much difference in the samples - but I've lost the "before" sample so I'm just going by the photos I took earlier.

Before much swishing and mashing in hot soapy water -

Actually now that I can see them together the second sample has tightened and is fluffier than the first so I guess it worked. What I did was I plunged the yarn into a bowl of extremely hot water with a little Ecover washing soap in it. Then I mashed it about for a bit with a wooden spoon and a potato masher, then I plunged it into cold water, rinsed it, wrung it out in a towel and hung to dry. Definitely something I would try again, perhaps with a slubbier yarn.

Also this week I succumbed to temptation and stared the Snowflake socks from the lastest issue of Interweave Knits. I love them - 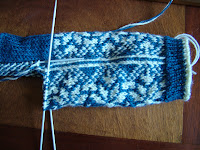 I'm knitting them in Wendy 5-ply Guernsey wool from the stash and they are knitting up very quickly. I did the three pattern repeats on the leg in one afternoon/evening.

They are stalled a little now as I am elbow deep in the new Rebus novel. It's turning into one of those books that I really don't want to finish (because it may just be the last one), but I can't stop reading. Anyway, more about it later when I've finished it.

Just one more thing to show you today - a great vintage knitting pattern I found at the weekend (on yet another car boot sale) - this one is for Gloves, Mittens, Helmets and Flying Gloves for the RAF. It's not dated but says it's designed and approved by the RAF Comforts Committee. It cost 3d when it was published. 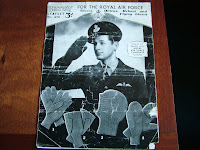