Christopher Eccleston is a God

I've always been a fan of Christopher Eccleston, from when I first came across him in Cracker where he had the grave misfortune to be stabbed by Robert Carlyle in one of the best episodes of this great series. Then he was in Our Friends in the North, an excellent series. He was also great as Doctor Who. Best line from his doctorship - Rose to Doctor "Why have you got a Northern accent?" Doctor replies, "Lots of planets have a North."

Anyway, he has confirmed his godship for me by popping up in Heroes, which is fast becoming one of my favourite TV shows ever. It's going to be on one of the satellite channels from March and will be on BBC2 later in the year, so check it out. It's awesome.

Not quite so awesome this week was the five part BBC/HBO collaboration Five Days. This was promoted as being ground breaking and exciting and the best TV you'll see all year yadda yadda. As far as I could tell the only thing that was original about it was that it was five hours split over five evenings. There were some really fine performances - Patrick Malahide was excellent as the grieving father - but all in all the whole was less than the sum of the parts. It should really have been a three hour drama, two hours could easily have been lost in editing and there were characters I just didn't care about enough, or see the point of - like the police press officer. And worst of all I had the murderer pegged from the first episode, thereby negating all their efforts to throw me off with unsubtle red herrings.

Nothing spectacular on the knitting front this week. The neck-down cardi continues apace, almost all of the first sleeve is finished now - still not sure if I have enough wool. I knitted the heel flap on Pete's socks only to discover that I has misread the pattern and it was too narrow so I had to frog back to the top of the heelflap and start it again on the correct number of stitches.

I've had fun spinning though. I started spinning the yummy coloured merino I bought a couple of weeks ago. I split the blues and greens out and spun them into this - 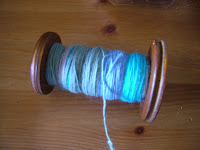 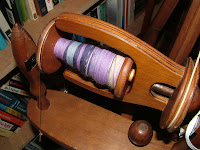 Then later today when I'm finished that I will ply them together and see what comes out - photos later, or tomorrow depending on when I get finished.

Finally, Project Spectrum started on the 1st february. This is a project to get more colour into our knitting / lives and there are three colours for each 2 month section of the year. For Feb/March the colours are blue, grey and white. Now I'm failing miserably to have anything colourful to show you so here's a photo of Pete and the Evilpixie washing her very blue car - 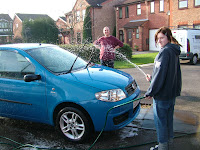 Anonymous said...
This comment has been removed by a blog administrator.
2:07 PM

I quite agree with you about the 5 Days programme, it was so drawn out, I was quite bored with it by the end, still there wasn't much else on, bring back John Deed! Look forward to seeing how the spinning turns out, I'm dying up a new batch of colours at the moment.