I know you've all been asking how the chooks are doing.

They've settled in well and are enjoying roaming the garden when we're able to let them roam free. There are a number of foxes round here so if we're not around then they are confined to their coop and run.

At the weekend and on my days off however they get to roam around the rest of the garden - much to the detriment of my rosemary bushes.

They're a lively bunch - still settling the pecking order but they're becoming more used to us and most of them will eat from your hand and if you're patient will let you pick them up. No eggs as yet and we may not get any now until the spring but we live in hope. 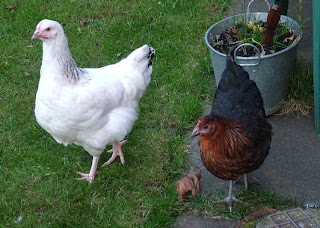 This is Hillary (after Hillary Rodham Clinton) on the left, and the one that was originally called CJ but seems to have become Seven of Nine (because she has a problem with one eye and isn't opening it properly - we're watching her carefully to make sure it isn't getting worse - it doesn't seem to bother her at all) 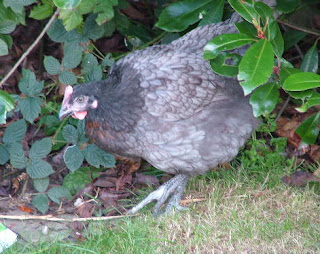 This one is nameless so far but she's really sweet. In the photo she's in their favourite place - under the bushes where there are lots of leaves to scratch around in. I love when they suddenly decide they are a bit exposed or too far from the safety of the bushes, then they all run, wings flapping back to safety. Daft birds.

Finally can you all please send positive thoughts to the Rays tonight. It's crunch time. They're 3-1 down in a best of 7 series. If they don't win tonight then the Phillies will snatch the World Series. Any positive thoughts you can send them tonight would be much appreciated. Jill, if you're reading this, I may just excuse you if you feel your allegiances lie elsewhere.