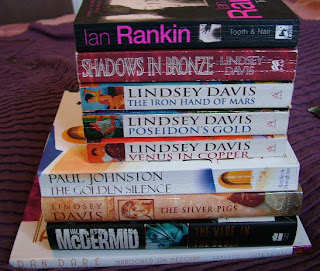 I struggled with these. I knew there weren't many on my shelf with metallic covers but I thought there might be a better selection with metals in the title. Apparently not. I give thanks therefore to Lindsey Davis who saved my bacon with her Falco novels. Some of the others are a little tenuous. The bottom one, in case you can't see, is Dan Dare - Marooned on Mercury. It's a reprint of the old Dan Dare story from the Eagle comic. Fabulous artwork by Frank Hampson.

I have totally failed to complete any projects in the Project Spectrum colours for this period, but I am playing with that black recycled sari silk - 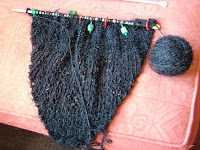 I started knitting a modified Clapotis with it. It will be heavily modified as I don't have enough of the silk to knit the pattern as it is written. I hope to do better in the next slot for which the colours are brown, orange and purple. I have the Sonnet cardigan (brown) ready to be sewn up and button added, plus I have some orange Rowan Tape that I have been saving for just this time (it's going to be a vest top - especially as it looks like we might finally get a little bit of suitable weather for it), and I have been spinning some lovely purple shaded roving which I hope to knit up in the next few weeks.

Yesterday I managed to get a little bit of dying done. There is some fantastic rainbow roving which I will be knitting socks with. I'm hoping to start spinning it later today. I just can't wait - it looks so scrummy. Here it is drying in the sunshine. (Yes, I know, sunshine!!!!!) 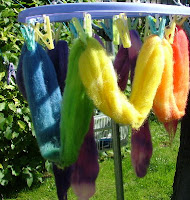 And some other pink and purple splodgy stuff - I'm calling this colourway "A Spot of Bother".

We nearly had a purple dog while I was doing this as Bubba decided he was going to help me. I was dyeing in the garden, on the patio so I could lay out the roving for the rainbow stuff. Trust Bubba to come and stick his nose in! In the end disaster was averted, but I did end up with a purple / orange finger as one of my gloves sprang a leak.

I got my invitation to Ravelry last week and have been browsing the site. I'm not sure I will use it to track my stash. This would only be helpful if it actually came round and found the stuff I was looking for. I know I have a skein of pink hand-dyed sockwool, bought at the Knitting Show at the NEC last year, but can I find it? Anyway, I think for me the best bit of the site will be seeing what everyone has done with various patterns and yarns. Lots of inspiration I hope.

I have also failed to finish the Karin Fossum I was supposed to read for Reading Group tomorrow night. Instead I read The Riverman by Alex Grey. It was interesting, but there were a lot of characters introduced in a very short space of time and it took a while for me to sort them out. Also I'm not sure I got a very good feel for the detective, he seemed a little one dimensional. Maybe I missed something by starting several books into the series. (This is the 4th one I believe). By far the most interesting character in the book was the Riverman of the title - the man whose job it is to fish bodies out of the River Clyde. I have to admit I was far more interested in him and the work he did than in the police in the book. There just wasn't enough of the man with the boat.

Now I'm reading Boudica by Vanessa Collingridge. I don't know much about our most famous warrior queen, other than from the fictional Boudica series by Manda Scott. I loved her portrayal of the Boudica and the Iceni people. Collingridge's Boudica is a very different kettle of fish, at least so far - much more Romanised than Scott's very Celtic woman. As we know very little about Boudica, apart from the Roman views of Tacitus and other later descriptions, I guess you can pick which portrayal you like best. We're probably never going to know what her life was really like.