Just some random thoughts today as it's a busy day here at Austin Towers.

Firstly, Maxine is accusing me of cheating with the pink Michael Connolly book (who, me? cheat?) - well it is definitely a pale metallic pinkyish colour on the spine (if nowhere else). It did seem unlikely at the time but hey, I was under pressure. And yes, I have read it and thought it was great. Gotta love that Harry Bosch.

I do also like the No 1 Ladies Detective Agency series. Tears of the Giraffe (which was also in the pic) was the last one I finished. I read one of these when I've had enough of serial killers and gratuitous violence...so not very often then. I am working my way slowly through the series, which for those who haven't read one yet can best be described as charming. There is no violence, no real crime to speak of, just a lovely gentle, humourous read. This makes them most unlikely candidates for my favourite books... but it works and I love them, just not too often or people will think I'm going soft!

I have just given up on Killing Time by Caleb Carr which is for reading group on Wednesday. I ought really to have ploughed on and tried to finish it but it was soooo tedious. And I have the new John Connolly sitting next to me on the shelf and it keeps whispering to me. Damn it, I hate attention-seeking books. I'm trying to ignore it but it's very persistent.

I have been knitting. Here are the photos (finally) of the completed Space Invader Socks 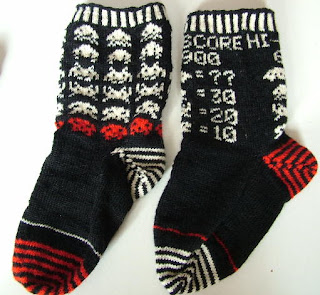 I think they're great although for some reason one leg is a bit wider than the other and the other sock has a wider foot. I swear I knitted them both exactly the same way. Anyway it's nothing too major, so I shall just live with it - not too noticable. I'm not sure I did the short row heels exactly right either as I was kind of expecting the stripes to match up and as you can see they don't...

Something to practice there I think.

Anyway as you know I can't be without knitting so I immediately cast on a pair of Cowgirl Socks from Interweave Knits Winter 2006 . The yarn is my own handspun in a colourway I called Pippin because it reminds me of apples. I love the socks which have knitted very quickly and are tolerant of the unevenness handspun qualities of the yarn. 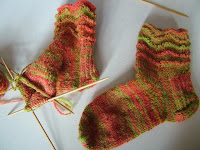 As you can see I have nearly finished them and I only started them on Tuesday, but then they are only short ankle socks.

I'm starting to think about the colours for this segment of Project Spectrum which are black, red and metallic. I should have waited to do the Space Invader socks this month as they are the only project I have in mind at the moment with those colours. Oooooh. I shall have to go visit a yarn shop and see what inspiration strikes me. What a great excuse. In the meantime I'm going to rummage in my stash and see what I've got that I can knit / spin / ply into something original and creative. Watch this space.

How awful of me, did I really use the "c" word? I agree, silver is such a useful colour, it takes on whatever hue happens to be next to it.
I'm currently reading Little Criminals by Gene Kerrigan and enjoying it so far. (via recommendation of Glenn at Int Crime Fiction)

I've linked this to my blog. and BTW, I had the same problem with the sock size!! The second one was toooo wide.