I have FOs to show you

I know I've been very remiss about blogging this week. Pete has been working an evening shift and it's got me all out of my normal routine.

But I've been knitting. Look I have finished objects -

And I've finished the first of Pete's dogwalking socks. These are just miles and miles of 2x2 rib and are absolutely soul destroying so I only knit them in little bits then I go and knit something interesting for a bit and come back to them - so it could be a while before I finish the other one - 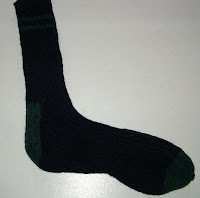 That's a terrible picture - they are navy blue with a couple of green stripes around the top of the leg and matching green heel and toe. Knitted in some un-named generic sock yarn from the stash.

which is the purple roving I dyed last week (or was it the week before). Anyway I love it now that it's spun. Not quite sure what I'll do with it yet. I've been looking for the right yarn for a couple of projects but I don't think there's quite enough of this for either one. It will have to sit in the stash for a bit until it finds its destiny.

And I started to spin this - 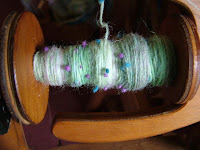 Which is more hand-dyed roving and I've tried to add some coloured nepps but I'm not sure I'm doing to right as they haven't spun in very well. Might need a bit of practice on that one. I thought the colour was a bit washed out looking when I was spinning it but it looks much darker on the bobbin so it is growing on me. Also strangely although the roving was dyed with equalish parts of green, blue and purple, it's the green that is really dominating the yarn when it's spun. That's typical because I didn't dye any nepps green - I only did blue and purple ones!

When I was at Stitch n Bitch on Saturday I was toying with the Origami cardigan and the teal/petrol blue wool/cotton from the stash. It seems the yarn just wasn't right for the pattern so now it has a new destiny - it's going to be a Luna Moth shawl. I've started it and it's going remarkably well for a first attempt at lace (all be it quite a simple lace pattern). There has been very little swearing if you don't count the bit where I couldn't get the provisional cast-on to "un-zip" like it said in the pattern. Took me three attempts and there may have been a bit of cursing. Anyway things are going Ok now (she says, tempting the wrath of the knitting gods). I took a picture but it just looks like a blue blobby thing so I'll try again at the weekend when the light might be better.

I finished the Elizabeth Peters audio book and I did enjoy it. I'm not sure I will be rushing out to read any more but as a one-off it was interesting, even if the plot did get a bit implausable towards the end. I would say that I've had my fill of Edwardians in Egypt but the next one for reading group is The Riddle of the Sands by Erskine Childers so it's back to the oasis I go.