This was the second of two days off in a row, after six days at work. I've spent most of the last two days knitting as I have rediscovered the love I was feeling for Icarus. I'm on the third chart now and am just loving the way the beads nestle into the fluffiness of the mohair. I want to knit it forever. But I won't because I also want to finish it so I can wear it on my holiday - nine weeks and counting.

I've found a lovely strappy top to knit as well, but I'm having a little trouble sourcing the yarn locally - it's only Sirdar, so it's not exactly rare - except in this part of the West Midlands apparently. I shall have to order it on the web, unless the little wool / haberdashery shop in Walsall stocks it (highly unlikely).

Bubba is doing well in his recovery - he's had two hydrotherapy sessions now with no ill effects and no limping. He has another 2-3 sessions before he goes back to the vet for the hideously expensive x-rays to tell if the bone is knitting properly. Thank goodness for pet insurance. I planned to take a photo of him basking in the sunshine, as that's what he's been doing all day, but the rain has arrived a bit earlier than predicted so we're sheltering inside now.

Because I've been knitting I've also been indulging in films. Today I watched Rob Roy which boasts some of the worst Scottish accents ever - Liam Neeson and Jessica Lange - shame on you. Yesterday's film "treat" was a truly terrible made-for-TV disaster Movie called NYC: Tornado or something similar. (Sorry, no link. Too aweful for DVD release apparently). Bad disaster movies are a secret guilty pleasure of mine - I just love them - especially those with a cast you've never heard of - no clues as to which of the actors will die a nasty death. NYC: Tornado was a classic of the genre. Mega storm system threatens the Big Apple - can the plucky meteorologist save the day? Heaven!

I've been reading too. I read Blood Lines by Grace Monroe. Words cannot express how much I hated this book. Several times I put it down and walked away vowing not to read another word. But I was supposed to be reviewing it for Eurocrime so I persevered and got through to the end eventually. I've not written my review yet, but I'm struggling for something / anything positive to say about it at the moment.

To cheer myself up after that I have started The Overlook by Michael Connelly. Just what I needed - a little time with Harry Bosch to restore my faith.

I am missing Euro 2008 already. Just when you get into a routine of football every night (and the associated knitting), Spain go and win and it's all over. I blame that Fernando Torres - surely he's not old enough to be out without his mum.... 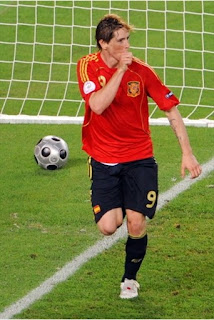