Knitting and Books Update (as promised)

So here is the promised update on book and knitting activity.

I went to check on the list to the right of this post to see what I'd been reading last time I posted and of the five books listed I am not actively reading any of them. They all reside in various states of incompleteness down the side of the bed (except Atonement, which is I fear hope lost forever, eaten perhaps by the dust buffalo that roam under the bed.) I feel therefore that a new start is perhaps required so next time I post I will erase the offending list and start again with books I am actually reading. Perhaps I need a new list at the bottom of books that I started but never finished. I should say that some of this is not the fault of the books themselves, or at least not the fault of the writing - I was really enjoying The Book Thief, but I have it in hardback and it's such a large heavy book that I find it impossible to read in bed and it's way too heavy to carry around. Consequently I am forever starting other books in its place. Atonement has no such excuse.

So, if I'm not reading those, what have I been reading. Well, I started An Expert in Murder by Nicola Upson, which is set in 1930s London theatreland and features Josephine Tey. Alas, I have abandoned this also. I'm not quite sure why, and it's possible that I may yet go back to it. It was quite enjoyable in a cosy sort of way, but it just wasn't gripping me. I think that while it was well-written, and as far as I could tell fairly well-plotted (though I hadn't got to the denoument of course) it just wasn't my sort of book. I'm feeling bad now for not finishing it. Perhaps I'll give it another go.


I did finish The Awakening by Kate Chopin. This was a classic that had eluded me. I have to confess that I'd never heard of Kate Chopin, but I picked up a couple of OU English Lit textbooks at a carboot sale the other week and when I flicked through them, this was one of the books that was studied. It's available in a lovely Dover Thrift Edition so I splashed out and bought myself a copy - a new one - not even secondhand! It was interesting, but I guess I just don't read enough of that sort of literature to be able to critique it properly. I can see that it could have caused quite a sensation when it was first published - a woman leaving her husband and setting up in her own house - how shocking!


Back on familiar ground I tackled The Watchman by Robert Crais. It's one of the Elvis Cole and Joe Pike novels, which I much prefer to any of the stand-alone thriller's he's written. This one is mostly about Joe Pike, and a woman he is trying to keep safe so she can give evidence. Great stuff.

Then from 21st Century California I hitched a ride on the Tardis to 12th Century Cambridge for The Mistress of the Art of Death by Ariana Franklin. This is a first novel about a woman doctor (rare in itself in the 12th C.) who specialises in "reading" the dead. She is sent to Cambridge to solve a series of brutal child murders, with her companions - a Jew and a Saracen. These three travelling together cause a stir even before they start to uncover evil deeds in the heart of Cambridge. I really, really liked this. The main character, Amelia, is wonderful as she finds herself in an unfamilar situation and with unfamiliar feelings arising. Watching her grow throughout the book and discover herself is just great. It's a fascinating setting with good characters and I'm looking forward to the next one in the series, which is called The Death Maze.


Somewhere in the middle of all that I also read the new Kate Morton, The Forgotten Garden. I liked her first novel, The House at Riverton (quite the best of last year's Richard and Judy books) and I liked this one almost as much. A light read, but a good tale, well told and with an intriguing narrator.


While I'm on the subject of R&J, their summer booklist is usually light on crime but this year has two, one of which I have read - No Time for Goodbye by Linwood Barclay. I think this may have slipped through the blogging net somehow as I don't recall writing about it at the time, but it was OK. Quite an interesting proposition - a girl wakes up one moring to discover that all of her family have disappeared in the night. There is no trace of them and she is left not knowing whether they were abducted and killed, or if they just up and left her. In either case she still wonders why she was left behind. Now she's grown-up and married with a daughter and the past is starting to catch up with her. As I recall it was quite well-written and the plot didn't go the way I expected it to. This is normally a good thing, but I seem to remember thinking that it would have been better if he (she?) had written it the way I wanted it to go! Anyway it's worth a read if you like American thrillers.

I'm now reading Blood Lines by Grace Monroe. This is the second in a series, the first of which I reviewed for Eurocrime last year sometime. I've just started it, so it's a bit early to tell, but I think it may be a very irritating book. More later in the week.


I think that's it for book news. Now knitting. There is hardly any knitting news. If you have been patiently wading through all the book twaddle in hope of a knitting disaster I apologise. Icarus progresses along slowly. I am almost at the end of the plain bit, I'm on the second skein of yarn and have threaded all the beads (and quite a few extras) onto the yarn ready to knit them into place. This has slowed progress considerably as I have to keep shuffling them down the yarn at the end of each row. I have finished the Power of Three socks, but I haven't sewn in the ends yet, so I haven't photographed them. They're not very exciting anyway - just another pair of Plain Jane socks. 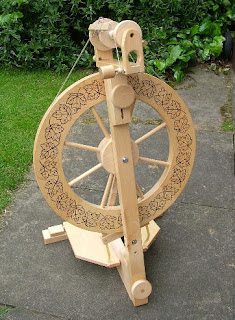 Isn't it lovely. It's a Lendrum wheel and comes with no less than 4 different flyers. (That means I can spin all kinds of yarns from big chunky ones to very fine laceweight stuff - in case any non-spinners were wondering). I bought it from a member of my spinning group and I love it. Here's a little close up of all the beautiful maple leaves running around the wheel - 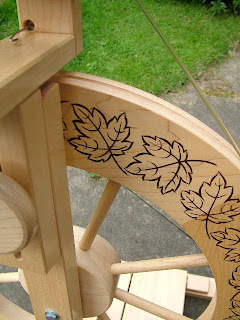 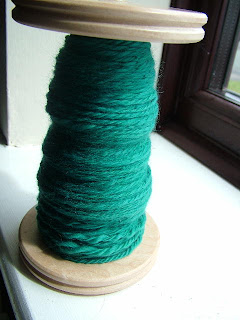 Finally, I feel I must convey my sincere apologies to the people of Spain. You see I have tipped them to beat Italy in the quarter-final of Euro 2008 tonight. My record so far in the tournament is not good. Way back in the qualifying rounds I was supporting England and Scotland, neither of whom even qualified. Once the tournament started I plumped for Romania, who went out at the first stage. Croatia were my next victim, and they went out in their quarter final. Last night I was knitting my orange jumper in support of the mighty Holland, to no avail. I'm afraid that I am the kiss of death to any team. If Spain lose tonight I'm expecting the German manager to be on the phone begging me not to support them.