I went to Stitch 'n' Bitch on Saturday and there was uproar. We've been meeting in the cafe at the Central Library for a number of years now but when we arrived on Saturday we got a real telling off from the woman who runs the cafe. It seems that our moving the tables so we can sit together as a group is "damaging" the tables (?), and apart from that we apparently never put the tables back (we always do!). We were made to feel most unwelcome. However we knitters are a resourceful bunch, plus we don't like being made unwelcome all of a sudden, so we are moving. From the beginning of March we'll be meeting in the Art Gallery Cafe (also known as the Edwardian Tearooms) instead. I shall not be sorry for the move. The coffee is better at the art gallery, and they were most welcoming and helpful when we asked them if they could accommodate us. I'm looking forward to the change.

I've been progressing with the Lapland Mittens - 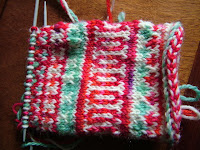 This is the second one so I'm hoping I will have a pair by the end of the week when the weather is predicted to turn rather nasty.

Because the mittens are not very portable, or very good to knit while nattering, I cast of a new pair of socks.

Aren't they colourful? They are Admiral R Druck in colourway 1744. Sorry Debbie, I know that's not very helpful. I bought the wool at the NEC but I don't remember who from, and a quick googling doesn't reveal any UK stockists. They are knitting up very nicely anyway.

I am still plodding on with A Vengeful Longing by R N Morris. It's plodding, not because I'm not enjoying it (I am), but it's quite a slow read. I'm having to pay attention in case I miss something and I'll admit to struggling a bit with the Russian nomenclature. The narrator almost always uses the surname of a character, but in conversation the other characters use the given name and patronymic. This means I occasionally (ok, more often than that), have to stop and think who is being referred to. It doesn't help that some of the names are similar, or have one part the same. I know this is being done for authenticity, but it's beginning to make my head hurt!

On Sunday, as Pete was away doing assault courses and crossing rope bridges with knives between his teeth, or whatever he was doing, I treated myself to a little day trip. I'd been looking for an excuse (however flimsy) to go to Wingham Wool Work near Rotherham for quite a while and this seemed like the ideal time. I had a lovely afternoon among all their fibrey wonders. I'll tell you more about it tomorrow and show you what I bought.

Oh, how silly. I went to the library group many times and we were some of the nicest, most considerate people there. They should consider themselves lucky you were meeting there and buying stuff, considering the quality of the food, etc.

The museum should be much nicer. Hope you are enjoying it.