Something I've Been Dyeing to Show You

Yesterday, while everyone was out and I had peace and quiet I had a bit of a play with the dyestuffs I bought at Wonderwool.
I also had some Koolaid which I used to make this -

That's some unspecified British Wool roving in shades of pink and red and orange and purple - much brighter in real life than it looks in the picture.

Then there's this which is more of the same roving but dyed with Procion dyes in Cerulean Blue, Royal Blue and Deep Purple. I love these colours together. 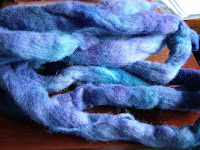 And finally there's some handspun Corriedale in much more restained colours of green and pale blue. 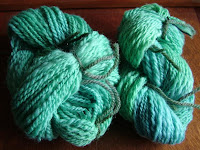 I think that's not too bad for a first attempt. And I managed not to cover the kitchen in dye, or spill anything. Anyone who knows me will realise that in itself is a major achievement.

I'm still knitting the Space Invader socks but I'm on the foot of the second sock now so the end is in sight. I might even finish them this afternoon, while watching the Play-Off final. Good luck to the Baggies!

I'm also still reading Dying Light by Stuart MacBride. It's proving a very enjoyable read. I shall have to look out for his new one, called Broken Skin, if I remember correctly. It's also set in Aberdeen, and I'd have to recommend it highly for an accurate portrayal of my home city, even if he does feature all the worst parts. He manages to convey a real feel of the old place.
Posted by Pat at 2:24 PM