Yesterday we spent the day in Tampa before we went to the US World Cup qualifier between the US and Antigua and Barbuda.

What can I say. It rained a lot.  We spent the entire day dashing to the car between downpours.  Quite a lot of time was spent in Barnes and Noble. What a lovely bookstore it is. I had a look at the Nook and thought it was a very impressive bit of kit.

Finally the time came to get to the stadium. And that's where the problem started.  The game was being played at the Raymond James stadium, home of the Tampa Bay Buccaneers American Football team. 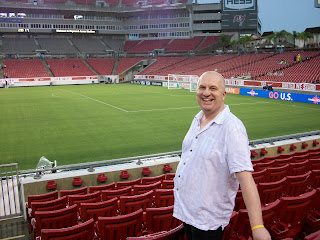 It's open air because American Football is a winter sport, but this is the rainy season. And boy did it rain. At one point, about half an hour before kick-off they had to clear the seats because a lightning storm was coming.  I think I can safely say that I've never been so wet in my life. I've had showers that were dryer than that match. Still it was an interesting experience.  The US supporters were enthusiastic, if not especially knowledgeable.  Before the game they all had tailgate parties in the parking lot, as they do with baseball and football. They all threw up gazebos, lit their barbeques and started in on the six-packs.  Can you imagine the reaction that would get at a premier league game?  Throughout the game they constantly wander about the stadium, getting popcorn or hot dogs or more beer. They even bring you the beer to your seat.  And yet it's completely a family atmosphere, with all the fans mixed in together and loads of little kids.  It could not be more different from an English game.

Last night's dinner, was of course a hot dog at the game... 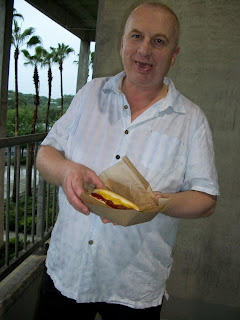 .   And I'm not sure if was that, or the drenching, or something else I ate yesterday but I was up all night throwing up.  Lovely.  So I'm having a quiet day today. Good news is that the sunshine is finally back so I'm catching a few rays on our balcony.

The title of this post, in case you were wondering, was a passing comment from a security guard as he ran through the rain, gun on hip, umbrella in hand, looking most incongruous.

Back soon with more fun in the sunshine state!
Posted by Pat at 8:20 PM