The spinning of fleece is not something that I do a whole lot of. I tend to like my fibre all clean and processed and preferably in a pretty colour (or two).


But, my spinning group will be at Middleton Hall on Easter Monday and decided we would spin the wool for and make a peg loom rug to demonstrate spinning and peg weaving. Sadly I shall not be there as I'm working but to get the weavers off to a good start we needed to pre-spin some fleece for them.


So last week at the meeting I was handed a bunch of fleece to spin. Now it had been processed, so it had been washed and carded (this was done by a professional processor) but it was still full of bits of vegetable matter and I did keep having to stop and pick out bits of grass and moss and other unidentified things as I was spinning. The idea was to spin it as thick as possible. I'm not sure I succeeded there. My default yarn (ie what I naturally spin if I'm not thinking about it) is something like a sport weight or lightweight double knitting. Recently I've been trying to spin thinner stuff - not quite laceweight yet, but certainly similar to a commercial 4 ply or fingering weight. It's been a long time since I spun anything chunky. 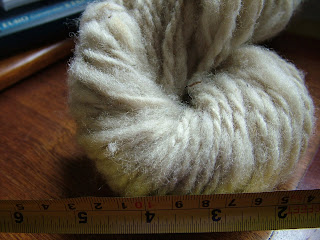 Anyway here's my feeble attempt. It's thicker in some places than others and it's still full of little bits of leaf and moss. It's not washed yet though, hopefully it will look better once it's been washed.

Did I learn anything? Yes, I did. I learned that I was right - I do prefer the clean and pretty stuff over fleece anyday ( and this wasn't even raw fleece - this had been partly processed already). But I also learned that I could spin chunky if I wanted to.

Bonus - I now have nice soft hands from all that lanolin.