This post is rather picture heavy, so be warned.

As you may have read I bought a loom last year, put it together with the help of the Evilpixie and discovered it wasn't at all what I thought I was buying. It was listed as being probably an Ashford loom but it turned out to be a countermarche loom from Frank Herring. This made it a much more complicated bit of kit than I was prepared for and I'd been putting off using the loom as the thought of it made me nervous.

However, there was no point in having it if all we were going to do was drape coats over it, so I rescued it from it tempoarary starus as coat-rack and got it warped up last week.

First I had to put new Texsolv heddles on the replace the old string ones that were on the loom when I got it. 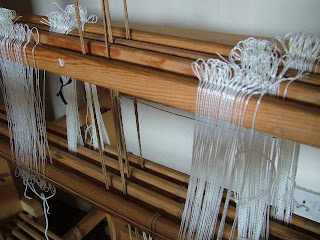 Then I wound the warp - this was 8/2 worsted wool from Fibrecrafts, half of which I dyed in a nice bright turquoise for contrast. I have been following the instructions in "Learning to Weave" by Deborah Chandler. I'd have to say the book is pretty brilliant and explains everything in easy to understand steps that even I can follow. 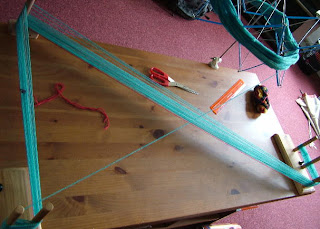 This is the cross (that stops the yarn from getting all tangled and helps when you come to put the warp on the loom). 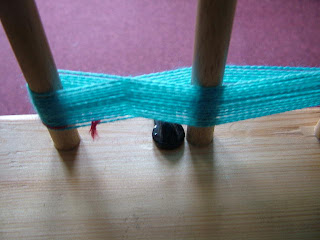 Here it is ready to warp up. 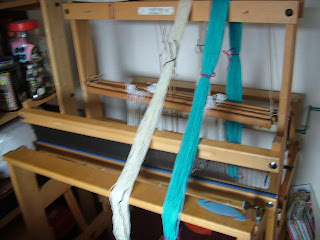 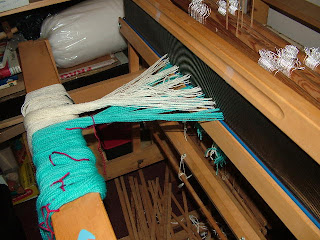 Threading the heddles (these move up and down, making the yarn move to create the pattern when you weave) 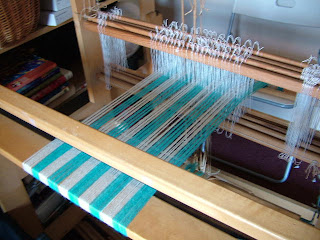 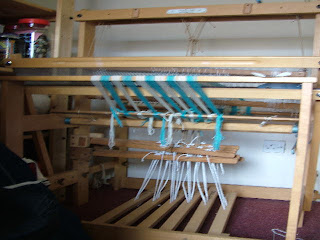 And finally some actual weaving, actually woven by me. 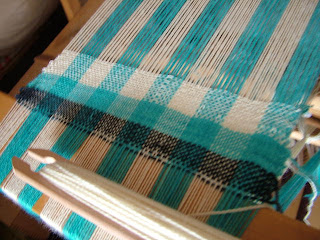 There are some problems with this sample - the tension was wrong on the right hand set of warp threads, meaning that the selvedge on that side was a bit wobbly, also there turned out to be a knot in one of the warp threads and it snapped so there is a little blip in the middle of the sample where that one warp thread is missing. Yes, I could have replaced it but it was just a sample. Also, despite the fact that I checked every 4 ends as I threaded them (as suggested by the book) I still managed to get one end in the wrong heddle, so it didn't rise and fall in the right place and I had to manually pick it up every other row. Finally it seems that my shafts (that hold the heddles) weren't level so the shed (that's the space between the yarns that you pass the shuttle through) was quite tight at one side. I've fixed that now and the shed is much better.

I continued with the sample from here as the book suggested and did several sets of rows with different tightness, and then wove some twill patterns.

I'm really happy with the sample (despite the odd error) and I've really learned a lot about how the loom works, how important even tension is, and how I need to check the threading more than once (possibly more than twice). Plus now I've tweeked the loom a little and the action is better.

More weaving fun next week when I try to weave something real - ie not a sample, and hopefully with a use at the end of it. I'm planning a scarf to start with. Expect swearing!