What's next on the TBR pile 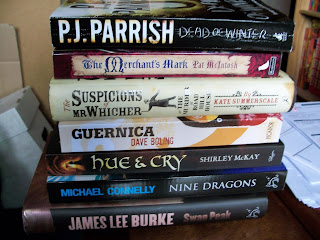 So that's where I'm going next on my reading journey, starting in Michigan at the top, then Medieval Glasgow, Victorian London, Spain during and just before the Second World War, 16th Century St Andrews, Hong Kong and finally Montana.


That should keep me busy for a while.


I had a little moment last week when I was neither reading a book nor knitting anything other than the perennial socks which was a tad disconcerting. I felt a little bit lost for a while. But I soon got over that, cast on several new projects and started a new book.


Currently I am reading South of Hell by PJ Parrish, which is the pseudonym of two women, Kristy Montee and Kelly Nicholls. I first read one of these last year, A Thousand Bones and I did enjoy it, then I read a second one, Dark of the Moon, which was just as good and which delved into the backstory of one of the characters. However I realise that I am reading them all out of sequence and that there are apparently 10 in the seies, not all of which seem to have been published in the UK. Anyway I spotted Dead of Winter in a charity shop last week. It is the second in the series so I'm jumping back and forth a bit here.


I just finished the other 2 books I was reading - Rome by Manda Scott or M C Scott as they seem to be calling her now, and Sweetsmoke by David Fuller.


Rome was an excellent read - just what you would expect from Manda - lots of great characters, historical detail aplenty, a cracking storyline and a touch of mysticism. Her books are really such an enjoyable read. I just get caught up in them and swept along. Reading this made me want to go back and re-read the Boudica series, and I'm glad to see that she's planning more in this Roman series.


Sweetsmoke was enjoyable too but in a different way. It's set on a tobacco plantation in Virginia during the American Civil War and is about a carpenter (a slave) trying to find out who killed a local free woman. So it's a crime novel of sorts but really it's just a very involving story about this man, Cassius, and his struggle to come to terms with who he is, and who he is allowed to be. Wonderfully written and beautifully told from Cassius' point of view. Interesting too to read about the war from the perspective of a slave. I love the cover - the hands are so expressive.


Then there is the pile to be worked through - which one first? Decisions, decisions...
Posted by Pat at 2:08 PM

Pat, thank you for your kind words about SWEETSMOKE. On a grim, rainy day, your review is truly a ray of sunshine.
David Fuller

That's no problem David, the pleasure was all mine. A gem of a book.

Hello Pat,
What a treat this morning to see our book on your TBR pile. And in such good company as well. We were late getting into the UK market but now Pocket is reissuing our backlist. But we're quite happy to be on the shelves at charity shops as well.