It Was Nice While It Lasted

I'm back at work tomorrow after my couple of weeks off so I thought I'd better update you on the crafty stuff I've been doing.

I started off the break with a nasty dose of startitis and I cast on three different knitting projects in the first week. I blame the cold weather as I suddenly felt the need to knit a cardigan, a shawl and a pair of mittens simultaneously. 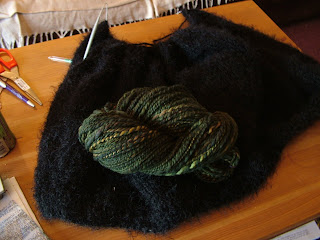 The cardigan is of my own devising with some (quite a lot of) help from Ann Budd's miraculous Handy Book of Sweater Patterns. It will (hopefully) be a round yoke cardigan and the main body will be in Sirdar Charleston. It's a funny yarn - quite weighty and warm and with frizzy bits sticking out all over - sort of like what you might get if you crossed a mohair with a yak - but totally manmade. It feels nice anyway and it was in the stash so I feel virtuous. Actually all the things I cast on were from the stash (and hence were either bootsale finds or bought in some sale or other) so I've been very frugal. The yoke is destined to be some handspun from Artists Palette Yarns - merino in a lovely foresty dark grren with hints of yellow and paler greens. There's a possibility it might disappear into the black and if that's the case I shall intersperse the rows with something lighter - a heathery purple probably. I've knit the body and am halfway up one sleeve so it's going well so far. I've spun the green stuff too as you can see from the photo, despite ongoing wheel problems. I went to the first meeting of my spinning group since Christmas and was merrily spinning away (slightly lopsidedly) and the other connector snapped too. Luckily there's a new set already on order for me. I managed to shorten the connectors and cobble the wheel together but doing so has changed the angle you put pressure on the treadles and the wheel now slowly walks itself across the floor when I'm spinning. Grrrrr. 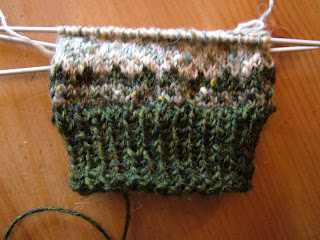 Anyway, also on the needles is a pair of Snowflake Mitts (Ravelry link). I blame Jo for this temptation as I first saw them on her blog and knew right away I wanted to knit them. I'm using some Rowanspun 4ply in a range of greens and neutrals and while I don't like them as much as I do the original blue mitts, I think the mossy green effect is very nice (plus I didn't have enough shades of blue in the stash). 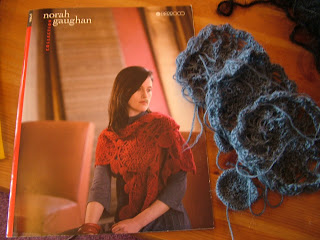 Finally my third project is Astrid from Norah Gaughan Book One. I believe I may have said in my New Year Would Like To List that I wanted to knit more of Norah's patterns and here I am already on the first. The yarn is some Jaeger Alpaca in a beautiful petrol blue (from the stash, she says smugly). So far I have done 6 of the circles. There are about 50 altogether and they are a bit fiddly to do so it may take me a bit of time. The alpaca is also possibly not the perfect yarn for this as it is sticky and the large circles involve several dropped stitches which are allowed to run - they need a bit of encouragement in this yarn!

The other thing I've been doing is quilting. When I was in Florida I bought a jelly roll (Moda Civil War Crossing) from Rainbow's End in Dunedin. And when I bought my new sewing machine last week I thought I'd have a little go at making the quilt I'd been planning. This would be my first quilt ever and my first large project since an ill-fated patchwork skirt in the 1970s. The new machine really made a difference and while I'm by no means an expert yet, and some of the piecing leaves a lot to be desired, here is the quilt top - 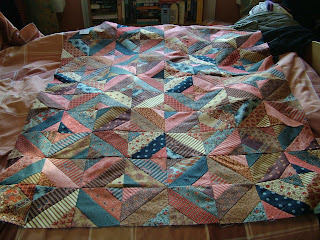 I love the colours, especially the faded blues. It still has a border to be added and then it needs binding and quilting but I'm really pleased with it so far. The pattern is Garden Trellis from Jelly Roll Quilts . I only started it on Friday so as to test the new machine. I think if I was to do it again I'd choose a pattern that didn't use bias cut squares as they were a bit tricky to handle for a relative beginner (the pattern did warn of this, but I chose it anyway!). Next up though, apart from the ongoing blocks for the sampler quilt (I think I'm still only at block 4 of 75) will be something bright and modern.

Ooh - Astrid! Looking forward to seeing how it turns out!