As promised a little update on the week's reading and crafting activities. These have been somewhat curtailed by having to work Monday to Friday this week - terrible! But at least it means a few days off in a row now.

Yesterday was a quiet day, with a trip into Lichfield to do a little shopping in the morning, mooch around the charity shops and a cup of coffee. Very civilised. The afternoon was filled with football scores, knitting and reading the papers. Oh, and cleaning the chicken coop. A bit messy but it doesn't take long. Usually it's a Sunday task but the forecast was for rain on Sunday. I'm not sure it would be so quick and easy in the rain. The chickens are becoming more and more friendly. Hillary in particular shows no fear and will let me pick her up without even any corn as a bribe. The others are a bit more reticent but we're getting there. Currently they are squabbling over a bowl of mash with apple sauce and mealworms added - apparently it's chook heaven!

I'm still in the throes of Christmas knitting so progress on my own knitting has been slow - I did a few rows on the Hypnosis sock and got to the heel. However the pattern has a few errors in it and that and the problem of reading the charts back to front and from the middle to the edge and back (the chart being written for knitting in the round and the heel being worked back and forth) was making my head spin.

I have however been weaving on my Knitter's Loom. 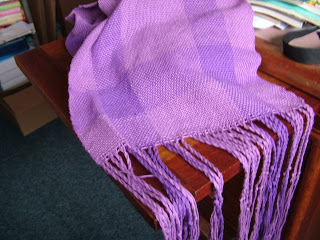 This is a Christmas scarf for my Mother in Law (don't worry she doesn't read the blog). It worked up very quickly. I warped the loom on Sunday afternoon and finished the scarf on Thursday evening. I'm very pleased with it and and am resolved to do more weaving.

I've been reading too, though not a lot. I started and finished Cold in the Earth by Aline Templeton. It's set in Galloway during the foot and mouth outbreak and as well as being a pretty good crime novel it's a fascinating picture of how a community is torn apart by an outbreak of the disease. I would certainly read another of these.

In a quest to find something as good as C J Sansom, which I can happily recommend to customers for Christmas gift buying, I am now reading Blood on the Strand by Susannah Gregory. I probably should have started with the first in the series but this is the one which was at hand. It's fairly good so far, but I shall have to see how the character of Thomas Chaloner develops. It's a bit later than the Sansom books, about a hundred and twenty years or so, but it's still an interesting period and not one I am familiar with (plenty of those to choose from given my knowledge of English history).

The other book I'm reading at the moment is City of Dark Hearts by James Conan. James Conan is the pseudonym of William Horwood (of Duncton Chronicles) and Helen Rappaport. It was previously published (in hardback I presume) under the title Dark Hearts of Chicago. I've not sure why the slight chance in name, doesn't really seem to make much difference. Anyway it's set in Chicago during the World's Fair in 1893 and it started well enough, but I'm around halfway, about 250 pages in, and the pace has slowed rather. Hopefully it will pick up again soon.