On Saturday I went to Wonderwool where I had a great time, bought some lovely stuff, met some great people and was generally inspired by the fantastic work of the artists and craftspeople who were exhibiting.

I was quite restrained with my purchases, considering all the stuff that I could have bought. I tried to restrict myself to things that I wouldn't be able to get locally or that I hadn't seen before (though there was lots of new stuff).

What I did end up with was this - 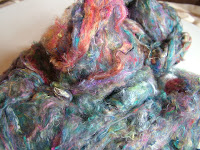 Now, this looks in the photo like a pile of the stuff that comes out of your hoover bag, but actually it's 50g of Sari Silk Fibre and is full of beautiful jewel-bright colours that the camera hasn't picked up. I reckon it will look amazing spun through some merino or a merino silk mix. This came from TwistFibreCraft, all the way from Newburgh in Scotland. As I may have mentioned before I spent several years in Newburgh when I was growing up, my parents lived there for a long time and it's a place that's close to my heart. When I lived there it was a bit rundown, not much happening, but the nice people at TwistFibreCraft say it's becoming quite an arty little community and I'm really pleased to hear it. 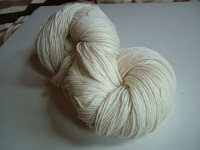 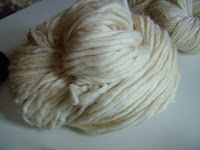 I also bought some cream 4ply Merino wool (on the right) which I will dye in lots of lovely colours, and some pencil roving (to the left) which was incredibly cheap as it was slightly water-marked. Again this will be dyed so the watermarking doesn't matter.

Next on my list was some Schoppel Wolle Fingerwolle - 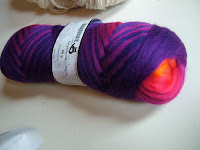 turning it into a great felted scarf like this one


I bought mine from ForestFibres at the show but you can also get them online from KnitnCaboodle. I'll show you how it turns out when I get the chance to make it.

My problem now is that I have so many ideas and projects in my head that I can't decide what to do next. Do I make the felted scarf? Or do I make the other scarf with the wonderful Wensleydale curls as a fringe? Or do I make a wrap using chiffon and merino like the great samples on the Moral Fibre stand.

I was totally re-enthused about weaving too, having seen all the beautiful work other people had 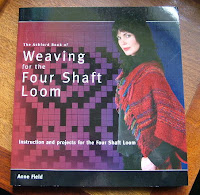 done. It made me want to really get to grips with it. To assist me I bought a book from The Threshing Barn stand. I'd been trying to get this book for ages but it doesn't seem to be available through bookshops here - trust me, I've tried. I was really chuffed to be able to get it at the show. There were tons and tons of great books there but I did just buy the one. 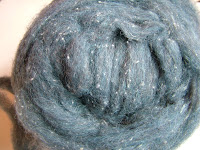 I'm not even entirely sure what it is (fibrewise I mean), and it looks like something and nothing on the screen but it's a steely grey shot through with subtle greens and blues and lots and lots of little neps of white stuff. Just lovely.

And that's about all for the woolly side of things, though I did get some wooden beads and a spare shuttle for my loom.

Because there was a whole other side to the day - along with Wonderwool the good people of Builth Wells had put on a Local Food Festival, with cookery demonstrations (Anthony Worrall-Thompson was there!) and tastings and lovely food to buy. I'd gone down for the day with Pete and he took the opportunity, while I was browsing the woolly wonders next door, to sample a bit of everything and we came home with some great local cider, some Welsh-brewed beers, olives (not sure how Welsh they were but they tasted great) and smoked nuts. There were sausages and cheeses and preserves and liqueurs and all manner of lovely tasty things which we tried but didn't buy as we couldn't buy everything.

All in all a great day was had by us both. I hope everyone else had just as much fun as we did, and that the traders did well and will want to come back next year. Thanks everyone for a fantastic day out!