What a Great Weekend!!

It's been a lovely weekend here for once. The weather has been much improved, and as it was the Bank Holiday Weekend it meant that even though I was working on Saturday, I still got 2 days off - Sunday and Monday.

And what lovely days they were too. Those of you know know me in real life probably know that I'm a great fan of car boot sales (that's flea markets for those of you across the pond). August Bank Holiday weekend is traditionally (at least by us) spent at a succession of car boot sales acrosss the Midlands where much fun is usually had, some money spent and a few bargains procured. This weekend has been exceptional. 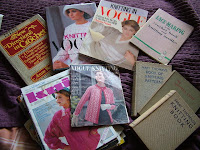 I got a whole host of vintage knitting patterns, a Vogue Knitting magazine from 1956 and a lovely little booklet called Lace-Making with Crochet Hook and Knitting Needles. It's undated but probably late 1940s. I also got Knitting in Vogue Books 1 & 2 and a great crochet book - New Directions in Crochet by Anne Rabun Ough. It's crammed with crochet stitches and designs.

My favourite books from Sunday however were Mary Thomas's Knitting Book (from 1938) , Mary Thomas's Book of Knitting Patterns (from 1945) and The Knitter's Craft (from 1951). This latter has great endpapers with a picture of Wensleydale Knitters from 1814..

And as if Sunday wasn't good enough, today at a local car boot that I nearly didn't go to because it isn't usually much good for the sort of stuff that I like to buy - I got this - 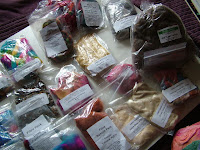 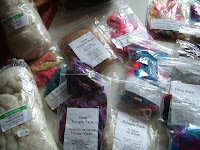 It's not very easy to see in the pictures but there's a whole pile of little sample bags and some larger amounts of fibres from Wingham and Texere. There's camel and soya bean and mohair and cashmere and various sparkly trilobal nylons and other synthetic stuff in bright colours. There's Shetland and Jacob and lots of little samples of lots of different types of silk in lots of different colours and then there was this - 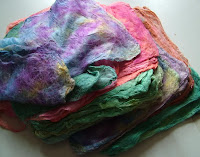 A whole pile of silk hankies - there's actually about 340g of them in a whole variety of colours. How cool is that? I'm not going to tell you how little I paid for them as you might cry.

It turns out that the girl who was selling them all had just finished a course in machine embroidery and she was selling off all her excess bits and pieces. I was chuffed to bits. So now I have lots and lots of stuff to play with and to experiment with and to blend with the kilo of Merino I just ordered from Fibrecrafts. 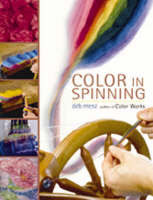 which I ordered last week and which arrived on Tuesday. It's a totally wonderful book, and I can't wait to get dying and blending and experimenting with all the colours and all my new fibres.
Posted by Pat at 2:32 PM

What an exciting and colourful post, can't wait to see what mixes and creations you came up with!