What I Did This Weekend

I had a day off on Saturday so I got to go spend it with some great people at a great place.

I went to the British Alpaca Futurity 2012. What's that I hear you say? Well it looks a bit like this.... 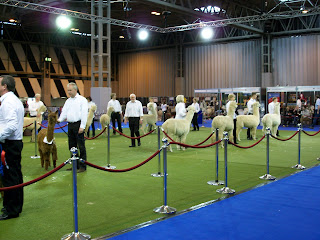 It was in a big hall at the NEC and in the middle of the hall there were alpacas as far as the eye could see - that's a lot of alpacas, trust me. It's kind of like Crufts but for alpacas and the alpacas were all being judged in the ring in the middle. And all around the edge were stalls and tables where people were offering services to alpaca breeders and selling alpaca stuff and teaching people what you can do with alpaca fibre. That's where I came in. I was with my spinning group - the lovely Walsall Handspinners and Weavers and we were there to demonstrate how you can spin alpaca fleece into yarn, and teach anyone who wanted to learn. We had a blast and met lots of lovely people.

There were some great vendors there too - Janet from the Threshing Barn was there with her huge stall of temptation, filled with fibrey goodies and beautiful colours and equipment. There was a stall selling weaving looms (Greg Meyer Looms) - and there were just brilliant. They had an 8 shaft table loom that folded up and went in a backpack. How cool is that. They had developed the looms themselves and I was very impressed. They were lovely people too. Classic Carders were there with their great range of drum carders. And Fleecewitch who had organised the craft demo area and was so helpful and friendly.

We had a fantastic day. And honestly who wouldn't when you were surrounded by this - 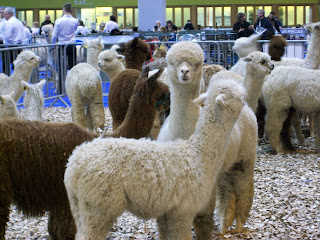 And then to top off the weekend I got the most amazing Mother's Day present from the Evilpixie. She's just back from a few days in New York and I may have suggested to her that there was a yarn shop just a few blocks from her hotel, and that 100g of sockyarn would make a wonderful present if she thought she might looking for a little Mother's Day gift. Well, she excelled herself.

Look what she bought me - 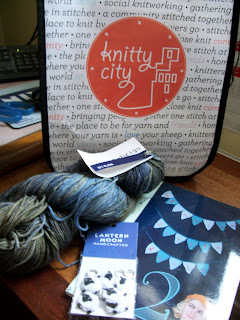 There's a skein of Malabrigo sock yarn in a beautiful colourway called Playa which looks like dirty denim - it's all blues and browns, a copy of Whimiscal Little Knits 2, some Lantern Moon sheepy stitch markers, and it all comes in a little Knitty City tote bag. I am very pleased indeed. Remember that she's not even a knitter and she got all this. She said the people at Knitty City were absolutely fantastic and really helpful. I am one happy mother.

The book update should follow soon but I'm off to Bath for the day on Saturday so I'll try and do a little bit of touristy reporting - it'll all be bookshops and secondhand shops though, no Jane Austen stuff.