I've been AWOL from the blog for a while, trying to get my head together and I think I'm finally getting there. My knitting mojo is beginning to return and I have been doing some other stuff in the meantime. Tomorrow I will do a big book update but today I'm being all crafty.

I had a Kirstie Allsop moment at a carboot sale a couple of weeks ago and bought a lovely old patchwork quilt. 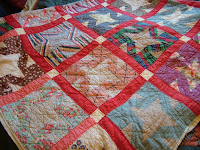 I love the colours. It's all hand stitched. I have no idea how old it is, but it has been well used (well loved, as we bookdealers like to say) and is rather tatty in places. In my mind that somehow adds to its charm. I don't know what I'm going to do with it, but it just called my name from its cardboard box in a muddy field and it only cost a fiver!

I've been doing a little quilting of my own 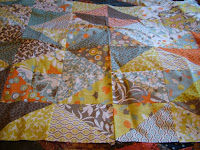 This is the Diamonds at Large quilt from Pam & Nicky Lintott's Layer Cake, Jelly Roll and Charm Quilts. It's a great thrifty quilt that can be made from just one layer cake and the one I used was Moda's Arcadia. A mix of blue, mustard, brown and orange - very summery. It will be a throw for the back of one of the sofas when it's done. That's just the quilt top in the picture. I still have to add the border and do the quilting. Sewing machine time is difficult to snatch during the summer holidays as there are often teenagers watching the TV where I do my sewing. The Evilpixie has not been very well this week - a nasty virus with stomach pains and headaches. Poor thing.

Finally I have been doing a little knitting. I did finish the Simple Yet Effective shawl that has been on the needles for ages -it was my carrying around knitting and I wasn't getting very much done. Desperate to prod my missing mojo with an FO I sat down and completed it while watching DVDs of The Unit. I added a frilly edge just to make it a little different from the other one I have. This meant that I ran out of yarn during the cast-off (about 2 feet from the end) and had to substitute some handspun to finish it off. Luckily I had some in a similar colour to one of the stripes and it's not too noticeable.

So, I now have new portable knitting - a sock 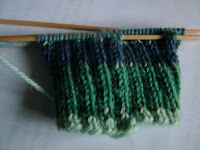 It's my standard sock recipe in Patons Croy, bought in Florida last year. The stripes are a little thicker than I wanted/expected. I might frog it and knit a sideways sock - seen a few patterns floating around the web that look pretty cool, and that would narrow the stripes a lot.

And at last I'm beginning to plan a new project, something I seem to have been unable to do lately. So, where to go when you need an inspiring knit, something to get those creative juices flowing again - you go to Norah Gaughan of course (well, I do anyway). Next up on the needles, providing I can find the right size of needle and can get the gauge right will be Loppem from Norah Gaughan book two.