Has anyone seen my mojo???

I've been really, really busy over the last few weeks and there have been all kinds of other stuff going on and it seems to have resulted in the loss of my knitting mojo. I completed the intarsia project I mentioned - it was a baby jumper with fish all over it. I was so out of it last week that I forgot to take a photo of it before I parcelled it up and gave it as a gift. Anyway it looked like this - 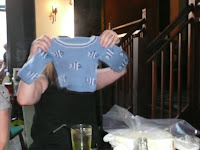 Sorry for the really bad picture, taken in the pub. I don't blog about work as a rule but it's been a stressful time lately and we were in the pub together to mark the end of an era. Our lovely manager was going on maternity leave and we have lost four member of our fantastic team through redundancy. It's been a tough few weeks and I'm glad it's over - happy that I still have a job, but sad that everything is changing.

I've not had a lot of reading time as you can imagine but I finished the Charlaine Harris and enjoyed it. I'm not sure it has converted me to the evil ways of Paranormal Romance but as a one-off it made a pleasant change.

I've given up on The Sweet Smell of Decay - it just wasn't doing anything for me at all.

I then read The Property of Blood by Magdalen Nabb. When the Evilpixie was small she was a big fan of Magdalen Nabb's children's books, about a girl called Josie Smith and I think I've read all of those (over and over again as you do when your kids love a book), but this was the first of her crime novels that I'd picked up. I liked the character of the main policeman, Marshall Guarnaccia, but I thought the plotting was a little weak.

Allotment news will appear later in the week - if I actually manage to get some photos taken.