Canadian Literature and the Miners' Strike

My reading this week has been mainly based in Canada for some reason.

I started off the week with a crime novel - The Calling by Inger Ashe Wolf. A serial killer is crossing Canada preying on the elderly, "helping" those who are already dying. No-one even realises he's doing this until he makes a mistake in the small town where Hazel Micaleff is in charge of the police. I liked the main character in this - she's in her sixties, divorced and living with her elderly mother. This is not a profile that would fit most fictitious detectives. The book was only okay however - the plot was a trifle on the weak side. It seemed obvious to me where the story was heading but I thought that it must be a bluff and there would be a twist at the end. I was disappointed however - the expected twist never came, leaving me with a feeling that I'd been cheated. I know that it's difficult to fool me in a crime novel - I've read so much crime fiction that I can spot a misdirection or a red herring at twenty paces, so I can forgive an author who doesn't quite manage to blindside me provided the plot or the character or the setting is original enough. This, for all it's promising start, original serial killer slant and just-the-other-side-of-middle-aged detective, failed to impress me in the end.

I stuck with Canada however for my next read as I'd got hold of a proof of the first novel by a Canadian writer called Shandie Mitchell. Under This Unbroken Sky is about a family homesteading on the prairies in the 1930s, about children learning how tough life is, about how some people can take the strain of that kind of life and some can't. It's a wonderful novel. It's not due for publication here until August but I can heartily recommend it.

For a bit of a change, because I had been meaning to read it for quite a while, and because this week was the twenty-fifth anniversary of the beginning of the miners' strike, I started GB84 by David Peace. It's typical Peace style - much jumping around between characters, different fonts, etc etc. It's harsh on the police, on the NCB, the government, Special Branch and the unions. I'm not finished it yet, I'm just about to hit the Battle of Orgreave, so there's a long way to go and Peace is just getting warmed up. I wonder if he ever gets the urge to write something fluffy.

Back to Canada then in the meantime for a bit of respite from at that eighties angst and violence. Three Day Road is set just after the end of the First World War. Niska, the last Canadian Medicine woman to live off the land, collects her badly injured and morphine-addicted nephew from the train which has brought him back from the Great War. It's a three day journey by kayak to get him home. I'm thinking I'm going to like this one just as much as I liked Through Black Spruce.

I've finally finished knitting all those circles for Astrid. Here are the final ones blocking, flanked by the pile of ready-blocked circles. 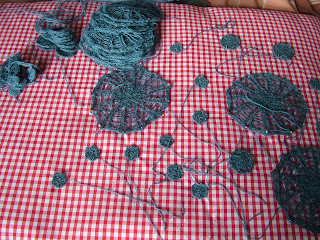 Now I just have to lay them out in the right order and stitch them together - all 52 of them!

I was slightly distracted mid-week by the sudden urge to knit a Simple Yet Effective shawl (Ravelry link). I blame my fellow bloggers for my failing - you know who you are. 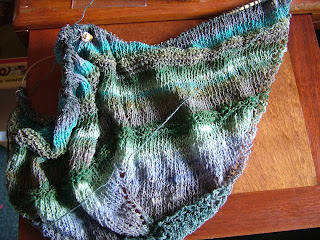 The shawl requires a ball of Noro Kureyon Sock Yarn - well, there just happened to be one in my possession, though I had started to knit those Hypnosis socks with it. Gribbit. They were soon frogged and the shawl started. It's perfect TV knitting so this week it has been the accompaniment to Red Riding on CH4, to almost a whole series of the Sopranos on DVD and this morning to the final part of Being Human. So much great TV drama, so little time. Better get some more Noro sock yarn!
Posted by Pat at 11:21 AM